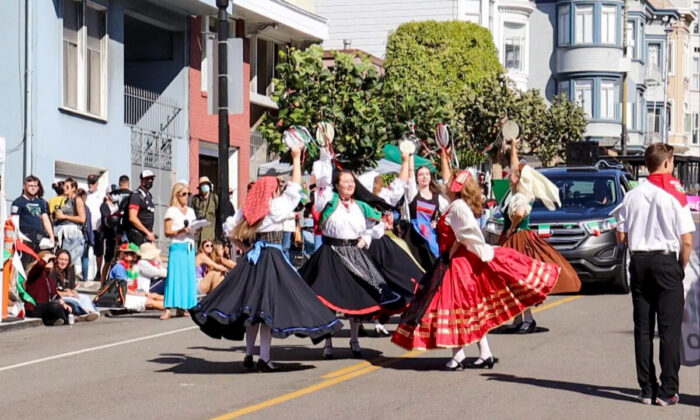 SAN FRANCISCO—People in San Francisco held the city’s annual Italian Heritage Parade in person this year to celebrate and honor the accomplishments of the Italian community.

On Oct. 10, colorful floats, cars flying the Italian flag, lively dancers, marching bands, and Italian and Italian-American dignitaries started at Fisherman’s Wharf, made their way along Columbus Avenue, and ended up at Washington Square.

“We have 85 entries in the parade this year, which is more than I expected, and everybody is just thrilled to be here,” said parade coordinator Ray Pulver.

Last year’s celebration was held virtually due to the pandemic. This year, attendees said it was great to be back in person to participate in the festivities.

Linda Gordon, a parade attendee who watched the parade with her dog, said they enjoyed seeing everyone come out to enjoy the festivities.

“He’s loving it! It’s been fun and it’s exciting and yeah, he’s a good sport, and he’s an amazing dog. It’s just a fun day in the city; it’s a beautiful day in the city,” she told The Epoch Times.

Over the years, the Italian Heritage Parade has grown to include more of the local community. Members of the U.S. Coast Guard and U.S. Navy also joined the procession.

“What I represent is those who have gone before me, who have given the ultimate sacrifice; those who are serving now; and those who are going to be serving in the future,” Lieutenant John Baker, a U.S. Army veteran, told The Epoch Times.

Another group of participants showcased the Chinese spiritual practice known as Falun Dafa. One of them, Dean Tsaggaris, told The Epoch Times he’s happy to share the practice with onlookers.

“We want to let people know about the beauty of Falun Dafa. Falun Dafa is a practice based on the principles of truthfulness, compassion, and tolerance,” he said.

Italian-Americans held the inaugural parade back in 1869. Originally called the Columbus Day Parade, it allowed San Franciscans to honor the accomplishments of its Italian community as well as to remember the first time Christopher Columbus crossed the Atlantic Ocean.

In 1994, the Columbus Day Parade was changed to the Italian Heritage Parade as a way to celebrate the accomplishments and culture of all Italians and Italian-Americans.

San Francisco’s Italian community hosts the event every year as part of the Italian Heritage Festival. This year’s festival ran from Oct. 8 through Oct. 10 and included a block party and a bazaar.

The Italian Heritage Festival usually coincides with San Francisco Fleet Week each year, creating a week of festivities to celebrate the people who helped build the country and those who serve to protect it.