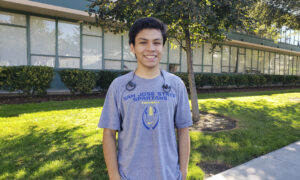 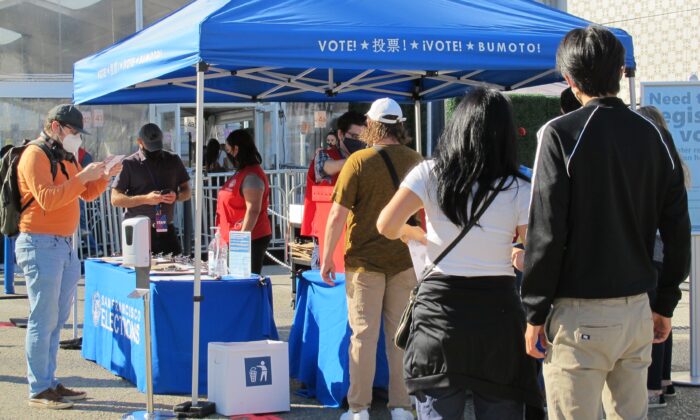 People drop off their ballots at a booth near the Bill Graham Civic Auditorium in San Francisco on Oct. 31, 2020. (Ilene Eng/The Epoch Times)
Northern California

SAN FRANCISCO—Across from San Francisco City Hall is a long stretch of white tents, with rows upon rows of voting booths inside.

It’s at the heart of a deep blue city in a deep blue state. In 2016, then-Democratic presidential candidate Hillary Clinton garnered more than 85 percent of the county’s votes.

Ahead of the 2020 presidential election, many voters near City Hall told The Epoch Times they’re voting for Democratic candidate Joe Biden, though some expressed doubts about the choice, and about the integrity of the voting process.

“I’m voting for Biden because I don’t really have an alternative,” William Kaplan, a resident in the Sunset District, told The Epoch Times. “I voted for Bernie in the primaries; he didn’t win.”

Kaplan said he feels “hopeful, but not exactly optimistic, because I feel like, as much as people don’t like to admit it, there’s a good chance that [Donald] Trump will win.”

Voting for the First Time

It’s the first time in Frank Joseph’s 66 years that he will cast a vote, though he didn’t say for whom he’s voting. He did say that he took part in the campaign of Democratic Mayor London Breed, and he felt good to be a part of it.

“This is my first time even considering voting in all my life,” he told The Epoch Times. “Right now [I’m] kind of emotional, because it’s my first time kind of going through the process and learning what it’s all about. And it’s good. It makes me feel good.”

He decided to vote this year because of the unrest and political climate in recent months.

As a black man, he said he feels being black is now a double-edged sword. He doesn’t agree with affirmative action, which aims to level the playing field for disadvantaged groups by creating opportunities for them in corporations and colleges. Some, including Joseph, say it’s a type of discrimination.

“To me, equality is having the same opportunity,” he said. “If we go apply for the same job, and got the same skills, then based on that, we get the same option. That’s it.”

“I also want to see a decent president. Not no businessman president, not no politician, but an actual human being who really cares, and in that position is willing to do what needs to be done,” he said.

Nicole Markowitz believes the city is in a crisis. “I live in an area where crime has really gone up, burglaries have gone up. People just don’t feel very safe anymore. And there’s not a whole lot of faith in our local government to actually do anything about it,” she told The Epoch Times.

She said she and other people she knows question where all the money in the city is going.

“There’s a lot of money that’s going into the homeless, into a lot of projects in the city, but as a resident who’s been here 14 years, it’s really hard to see it. Especially right now,” Markowitz said.

On a national level, she hopes Biden will unify the current divisions.

Karen Ho works in the health field, and she hopes Biden will win. “There’s just hardly anything he [Trump] believes in that I believe in. He’s kind of the opposite of what I believe in,” she told The Epoch Times.

She labels herself as a “moderate liberal.” She’s concerned about the homeless, crime, and taxes.

Rick Damiani is not voting for Trump because he believes the president angers people and creates conflict.

“I’d vote for a pitcher of spit versus the president we’ve got now,” he said. “It has nothing to do with the policies. It’s just all about making people angry, and we don’t need that,” he told The Epoch Times.

For Nikhil Kumar, important issues include climate change, unifying the country, and being able to trust the government.

He hopes Biden will win and that “it’s a peaceful transition of power and no riots and violence on election day.”

He doesn’t expect much from Biden’s economic policies, but “I think he’s genuine and can be trusted, that he has the best interest of the masses at heart,” he told The Epoch Times.

Irish Pellas hopes Biden will win, but she said she has low expectations for him.

“I feel like it’s like everybody has to play the game of politics, so I feel like it’s really hard to say if one person can really fulfill all your needs as an individual,” Pellas told The Epoch Times. “I’m hoping for the best, but expecting the worst.”

‘Hard to Trust the Outcome’

Bridget Blount said she felt good after dropping off her ballot, but “I also feel nervous, because of all the inconsistencies of people who have dropped their ballots off at different various locations in different cities and states and ballots that are coming up missing.”

“It’s going to be really hard to trust the outcome,” she said.

Though she worries about the accuracy of the results to come, she still believes it’s important to vote.

“It’s not just about electing our president, and commander-in-chief of this country, but it’s also about [the] city that you live in—all the different measures that are in the ballot that will impact us and the future generations to come. And that’s what people need to understand.”

She is most concerned about state Propositions 15 and 20, though she didn’t say which way she voted on them.

Prop. 15 will bring commercial property taxes up to market value, instead of taxing them based on the original purchase price plus a limited growth over the years as is currently done. Opponents say it will hurt businesses in the state; proponents point to the revenue it will funnel into education.

Prop. 20 would restrict early parole, recategorize crimes, and require DNA collection for some misdemeanors. Opponents say it will keep more people in prison, which is costly, instead of emphasizing rehabilitation. Proponents say it readjusts penalties for serious crimes that have been lowered too much in recent years.

On a national level, Blount hopes that no matter what the election results are, “each candidate respects the result. [That] we as a nation respect those results and honor them, that there’s not chaos, that there’s [not] a disruption in our goods and services where we’re not able to function because people will be so bitter and in such disbelief.”

“No matter who the president-elect becomes, [I hope] that the party who doesn’t win, that they respect the decision.”