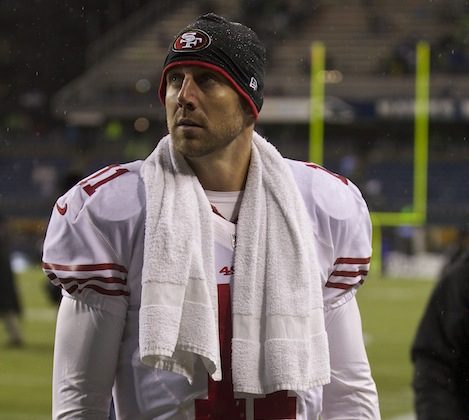 The San Francisco 49ers have traded former starting quarterback Alex Smith to the Chiefs, according to a report on the NFL’s website, which cites Fox Sports insider and NFL Network contributor Jay Glazer. No trades can be official until the league year starts on March 12.

The Chiefs will send a second-round pick in 2013 and a conditional pick in 2014, according to NFL.com’s Ian Rapoport.

Kansas City quarterback Matt Cassel will be released, according to the same report.

The 28-year-old Smith became expendable this season after the emergence of Colin Kaepernick, who started after Smith suffered a concussion in early November against the Rams. By the time Smith was healthy Kaepernick had proved to be too valuable, with his passing and running ability, to put Smith back in and so Jim Harbaugh made the tough call to bench Smith.

The Chiefs aren’t getting just another backup though. Just a week prior to his injury Smith was 18-for-19 against Arizona for 232 yards and a trio of touchdowns. For the season he had a quarterback rating of 104.1 with 1,737 yards with 13 touchdowns against 5 interceptions.

The Epoch Times publishes in 35 countries and in  languages. Subscribe to our e-newsletter.