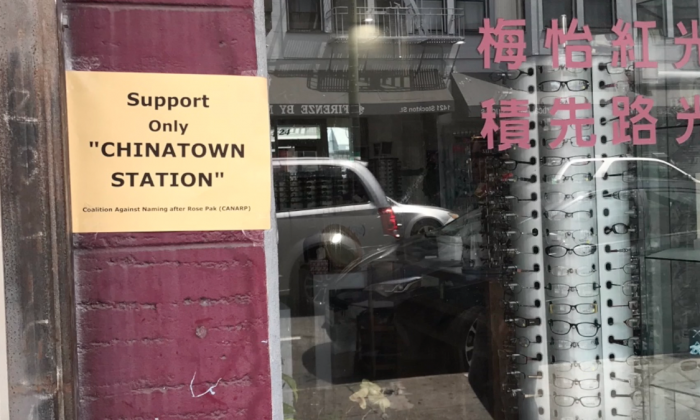 Posters in Chinatown supporting using "Chinatown" as the name of the subway station. (Courtesy of CANARP)
By Nathan Su

SAN FRANCISCO—Controversy is escalating over a proposal to name the new San Francisco Chinatown subway station after the late Rose Pak, a political power broker.

Aaron Peskin, the San Francisco Board of Supervisors member who proposed the name, has previously criticized Pak, identifying her as an agent of China.

“Rose Pak has been able to work with people to get undue influence in gaining city contracts and in gaining land use approval to build new buildings in San Francisco,” Peskin said in an interview with New Tang Dynasty (NTD) Television during the 2011 San Francisco mayoral election.

The major reason for the controversy over naming the station after Pak is concern about her close ties with Beijing’s communist regime and her involvement in corruption in local politics.

On May 14, a group of people who opposed naming the station after Pak spoke during the public comment section of the Board of Supervisors weekly meeting. One of the speakers played an audio recording of Peskin’s 2011 NTD Television interview at the meeting.

The stance Peskin expressed in the 2011 interview was in line with the concerns of people today who are opposing the naming proposal.

He did not try to deny all the public comments and the evidence presented against Pak, but he said he still wanted to recognize Pak’s work.

Peskin previously served as a member of the Board of Supervisors representing District 3 between 2001 and 2009, and he left his post in 2009 upon reaching his term limit. District 3 includes Chinatown.

In 2015, Peskin was reelected to the Board to represent the same district. He also served as the chairman of the city’s Democratic Party from 2008 to 2012.

In an interview with The New York Times in 2011, Peskin revealed how he was approached and courted by Pak.

“It was very seductive,” Peskin told The New York Times.

He told the newspaper that Pak gave gifts and invited him, his wife, and other officials and business leaders to meet senior officials in China.

“What I didn’t realize at the time was that I was being lobbied,” Peskin told The New York Times.

Peskin also told the newspaper that on the last night of his trip to China, he and Pak were joined in Hong Kong by one of San Francisco’s largest contractors, who had flown there to have dinner with them.

Sun Yat-Sen was the founding father of the Republic of China (also known as Taiwan). Sun built the first democratic republic nation in Asia, drawing his ideas from Abraham Lincoln and Confucius.

Few people have voiced opposition to the first two choices. Naming the station after Pak is the only one that has been sharply criticized.

On May 6, a crowd of residents representing several different groups rallied in front of City Hall to protest the use of Pak’s name for the station.

Those who disagree with using Pak’s name mainly belong to three different groups: people who are concerned that Pak’s special ties with communist China could bring bad implications to Chinatown; Chinatown residents who have years of experience with Pak’s ruthless behavior; and people who believe Pak is not qualified to represent Chinatown’s long history and culture.

“How can I explain to my children, there is such a person who does things unreasonably in Chinatown. And she doesn’t pay to get [a] haircut, doesn’t pay to eat,” Maggie Tang, a Chinatown resident, said in Cantonese at the May 6 rally in front of City Hall.

Some protesters at the rally also said that Pak had used some Chinatown gangsters to retaliate against people she didn’t like.

At the May 14 Board of Supervisors meeting, several adherents of the spiritual discipline Falun Gong spoke about the hate crimes committed against Falun Gong in Chinatown.

Falun Gong adherents presented a video showing how Pak led a deceptive effort to collect signatures against Falun Gong in Chinatown. People on the streets were asked to enter a prize drawing by signing their names, and they did not realize they were actually signing their names on an anti-Falun Gong petition.

Speakers at the May 14 meeting also presented an FBI report showing that Pak purchased two real estate properties within nine months in 1991, and then she purchased an affordable housing condo unit in 2002 with the BMR (below market rate), which could only be offered to low-income buyers.

Quoting the FBI report, a press release from the Coalition Against Naming After Rose Pak (CANARP) stated that Rose Pak obtained a brand-new condo with government assistance through her relationship with the mayor’s office and the real estate developer.

The FBI report also stated that Pak was not entitled to obtain the unit, since she purported to be a single person, whereas the unit had two bedrooms and two bathrooms and was intended for a family.

Guang Zhongwen, a resident of Chinatown, said at the May 14 meeting that Pak was not qualified to represent the culture and history of Chinatown.

One of the reasons for Peskin’s proposal was to recognize Pak’s work in helping build San Francisco’s Chinese hospital, which has also become controversial. According to a report by the San Francisco Chronicle, only one year after its opening, the hospital already suffered heavy financial losses, and it has been placed under investigation for corruption at the top management level.