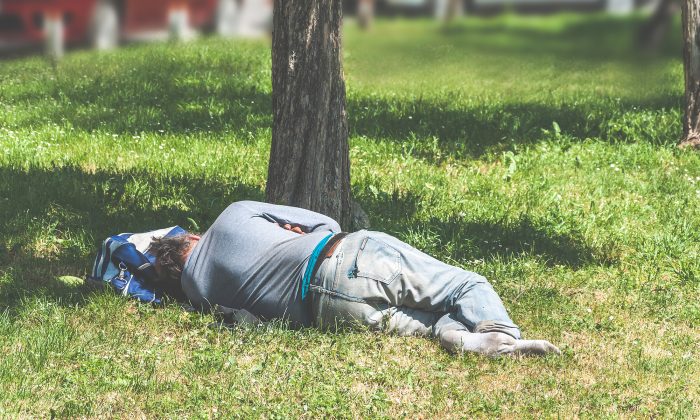 A recent project by Open the Books, a nonprofit organization dedicated to providing transparent information about government spending and actions, analyzed a San Francisco database of calls to the city’s primary customer service line about the debris from 2011 to 2018. In mapping out all the reports, the organization detailed a sharp rise in the number of cases across the city.

“The city admits that they estimate there are 7,500 homeless people in the streets of San Francisco, and by all accounts, these are the folks that are not using public restrooms, but are going to the bathroom and leaving their medical debris on the streets,” Adam Andrzejewski, CEO and founder of Open the Books, said.

Additionally, the city’s 311 call line received at least 132,562 reported calls of human fecal matter on city streets since 2008, according to data published in Forbes.

This recent exponential growth in waste on the streets is starting to negatively affect the city, with major conventions pulling out of San Francisco and tourists repelled by the smell of the dirty streets.

Health and safety are also cited as a major concern for both residents and visitors to San Francisco, as hypodermic needles and human waste are often visible on the streets.

According to the 2018 report from San Francisco’s Budget and Legislative Analyst’s Office, the city dedicated around $54 million for the 2017–2018 fiscal year to keeping its streets tidy and feces-free. That’s a 54.3 percent increase from the previous year’s $35 million budget.

Mayor London Breed vowed in 2018 to clean up the streets as part of her mayoral campaign and as the current mayor, but the “dirty streets” situation continues to be an issue.

In the current 2018–2019 fiscal year, San Francisco has already spent $72.5 million on street cleaning, yet reports of excrement on city sidewalks continue to rise, according to the San Francisco Chronicle.

As many homeless and mentally ill individuals on the streets often lack access to public restrooms, the only other option for them is to leave their waste in the streets.

The website “Curbed San Francisco” reported in 2018 that the city distributes nearly “400,000 or so monthly distributed needles, [and] the city collects approximately 246,000 back on a monthly basis.”

As such, only about 60 percent of needles distributed by government-funded centers are collected back, while the remaining needles are eventually discarded in public areas.

“The government should not be feeding their [needle users’] bad habits,” said Zhou.

Zhou had proposed that, if elected mayor, part of her work would be to push government officials and local city leaders to reach out to the people on the street who need help, and to create a plan to get people off drugs and needles, and change drug addicts’ habits.

“It’s just like a mom, you treat people like a kid, like family. No mom and nobody wants to see kids, any kids suffer, dying on the streets. Over the last two years, more than 400 people died on the streets,” said Zhou.