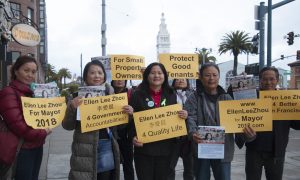 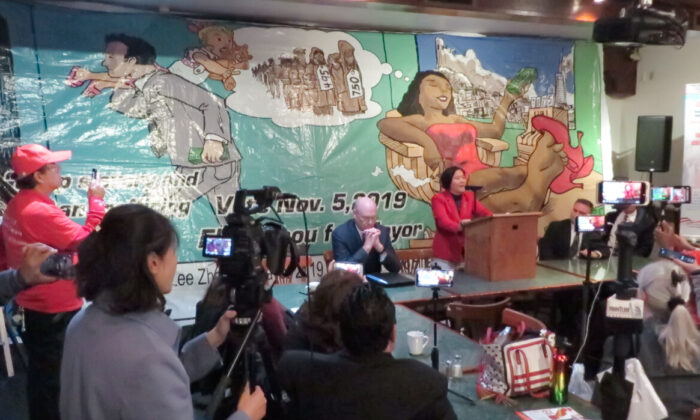 About two weeks before the upcoming San Francisco mayoral election, Breed and her supporters started calling some of Zhou’s campaign billboards “racist,” which caused two billboard companies, CCM and OM, to take down some of Zhou’s billboards.

Paul Taylor, volunteer spokesman for Zhou’s campaign, told The Epoch Times that Zhou’s campaign had put out a total of 20 billboards, and 13 of them were taken down. Taylor believes the damage will cost Zhou the election.

Taylor was a candidate for Dianne Feinstein’s seat in the U.S. Senate in the 2018 election.

Steven Bailey, senior staff counsel of California Constitutional Rights Foundation (CCRF), said at the conference that CCRF will be the legal representative for the two plaintiffs in the case, which are Zhou’s campaign and Asian American Freedom Political Action Committee (AAFPAC). AAFPAC paid for some of the billboards, according to Taylor.

Bailey is a retired judge and was one of the two candidates for California state attorney general in 2018.

Zhou’s campaign, which is largely operated by volunteers, has mainly relied on these comic-strip-style billboards around the city blocks to depict the problems that the city faces, including homelessness, drug abuse, illegal immigrants, human trafficking, government waste, and so on.

One specific billboard design, which led to the “racist” controversy, showed an African American woman wearing a short red dress, leaning back on a chair with her feet up on a desk, a smoking cigar in one hand, and her other hand holding a stack of cash.

The message on the billboard was “Stop slavery and human trafficking in SF.”

At the press conference, Zhou said the billboard was telling the story of Breed making more than $300,000 a year while homeless people die on the streets and human trafficking takes place in the city.

According to a CBS report, Breed criticized the billboard, saying, “There are ways the policy decisions I make can be criticized without making things sadly personal.”

Maggie Muir of Breed’s reelection team released a statement saying that the “blatantly racist and sexist ad has no place in our political discourse or our city.” The billboard design was also widely criticized by many Democratic politicians.

Zhou said that as an Asian American woman, she’s not racist. She said Breed is racist because the mayor refused to join the mayoral election debate to discuss issues facing the city with five other candidates, including three Caucasians and two Asians.

While the controversy around the billboard design continues, the Nov. 1 press conference focused mainly on the legal consequences of the removal of the controversial billboards.

“Unfortunately, [the billboards] hit the nerve of the political establishment and machine in San Francisco,” Bailey said.

He said the legal case will be about the alleged violation of First Amendment rights and breach of contracts.

“There’s nothing about this billboard that is racist,” Rochelle Conner, president of the Frederick Douglass Foundation of California, said at the conference.

Conner, an African American woman, said: “As a woman of color, I stand with Ellen Zhou. She is a woman of integrity.”

“I am here to support Ellen, and please vote for her,” said Marco Gutierrez, representing Latinos for Trump.

“I am a grateful citizen of the United States of America, and Donald Trump is my president,” he said.

He said that he’s been labeled a racist because he supports Trump.

Zhou is also a Trump supporter, and she’s been called the Chinese Donald Trump in San Francisco. Similar to Trump’s donating his salary, Zhou made a promise that if she’s elected, she’ll donate half of her salary to help improve the safety of the city’s neighborhoods by dealing with homelessness and drug abuse.

At the press conference, one of the billboards taken down by the city was used as the backdrop. Zhou and her supporters all signed their names on the backdrop after the conference.

Taylor told The Epoch Times that CCM took down 10 of 16 billboards that were in a contract with Zhou’s campaign, and OM took down 3 of 4.

Many local Chinese media in the Bay Area attended the conference.

Taylor announced at the conference that the billboard backdrop with the signatures of Zhou and her supporters will be offered for public auction. The money raised by the auction will be used as funding to support the legal case.