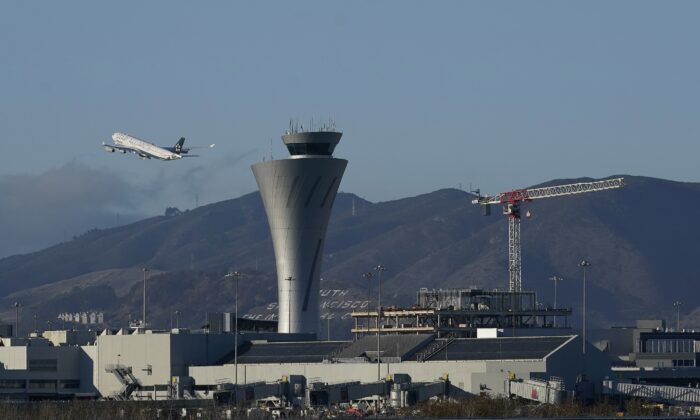 A plane takes off behind the air traffic control tower at San Francisco International Airport in San Francisco, on Nov. 24, 2020. (Jeff Chiu/AP Photo)
US News

SAN FRANCISCO—San Francisco is requiring all workers at San Francisco International Airport to get vaccinated against COVID-19 or undergo weekly testing if employees are exempt.

The mandate announced Tuesday applies to all on-site personnel, of which there are about 46,000. Mayor London Breed’s office said the mandate, which goes into effect immediately, is the first for a U.S. airport.

Hawaii requires workers at state facilities, including airports, show proof of vaccination or provide weekly verification that they’ve been tested at least once or twice a week with negative results.

“As SFO prepares for the upcoming holiday travel season, and the return of pre-pandemic passenger levels, we have an obligation to provide a safe airport facility for the traveling public and our on-site employees,” said Ivar C. Satero, the airport’s director.