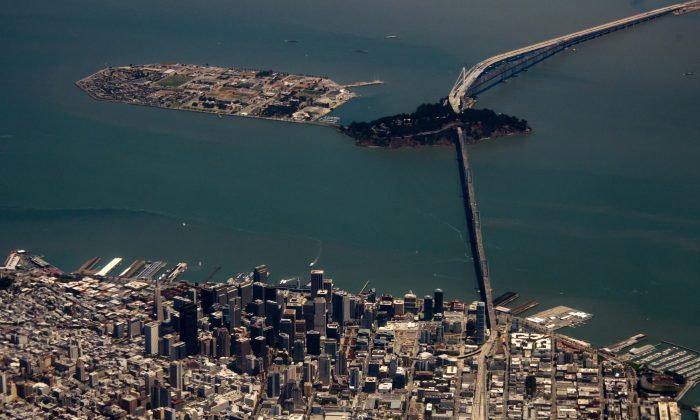 An aerial view of downtown San Francisco is seen on June 12, 2013. Development in the city won’t be slowing down anytime soon, with the pent-up demand for housing. (JOE KLAMAR/AFP/Getty Images)
Northern California

Development in San Francisco won’t be slowing down anytime soon, with the pent-up demand for housing. The South of Market (SOMA) area is in demand from buyers, but on the developer side, the land is really all planned out.

“I am now concentrating on the Civic Center area, because I believe that is the next area that is going to become a marvelous neighborhood,” said Oz Erickson, president of Emerald Fund. Along with 100 Van Ness, which will be 399 units, Erickson says that Emerald Fund has projects to begin in January and the following year totaling 1,000 units in the Civic Center area to come within the next four to five years.

In addition to Emerald Funds’ projects in the area, Crescent Heights’ NEMA apartment complex adds over 700 units, and these developments will populate the city into the “next transformative neighborhood,” Erickson said. “It will become an incredible neighborhood.”

As a developer, where the City goes, Erickson follows.

“You have to build in an area where there will be appropriate growth, where there’s a good chance that there will be growth that exceeds the growth of other areas,” Erickson said. “For example, I personally wouldn’t do a project in Pacific Heights, simply because it’s built out. It’s going to be extraordinarily expensive to do it, and it wouldn’t increase more than the current market.”

“It usually happens with a rezoning,” Erickson said.

In a seven-by-seven city, space has always been an issue, and even more of a consideration with height limits. Eventually certain areas will be built out.

“We do have a constrained geography, we only have 47 square miles and many of the neighborhoods won’t allow high density,” Erickson said. “There has been increasing push-back on high density even in those neighborhoods.”

Rincon Hill, for instance, was an approved neighborhood plan, and once those buildings are in place, it’s built out, Erickson said. “There are serious restrictions that can be between towers here.”

“If you lived in a tower that was built according to a plan, you wouldn’t want, across where you thought there was going to be a 60-foot building, to have them change the rules and have them put up a 400-foot building, would you?”

Due to the economy in the recent past years, development had stagnated, resulting in a large shortage of housing. Erickson says he expects the city to comfortably absorb around 4,000 units a year for the next four or five years.

“That should help meet the pent-up demand and should meet future demand,” Erickson said.

“But if you have 10,000 jobs, then you can basically sustain a growth of 3,000 to 4,000 units every year indefinitely,” Erickson said. “In San Francisco, I think you will eventually have locations that will accommodate 60,000 to 70,000 units of new housing. There are already approved projects totaling around 20,000 … but I don’t think that San Francisco will ever get much bigger than 1.2 million people or so.”

Erickson has been working in real estate in San Francisco since 1978 and has built over 2,500 units just in San Francisco over the years. He notes that the types of units he’s built to accommodate the “San Francisco lifestyle” have continually changed.

“The population of the city is increasingly people in their 20s, early 30s, that are looking to share an apartment with a friend or a significant other,” Erickson said. “They don’t want large four- to five-unit apartments. They’re not family-oriented people that are moving here. They’re young and they’re mobile and they want to keep moving.”