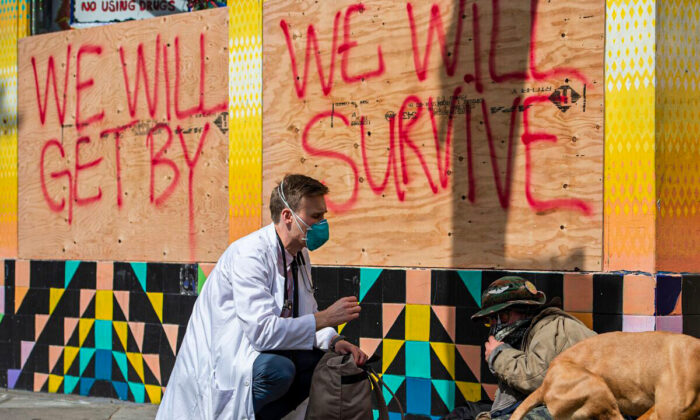 Stuart Malcolm, a doctor with the Haight Ashbury Free Clinic, speaks with homeless people about the coronavirus (COVID-19) in the Haight Ashbury area of San Francisco, Calif. on Mar. 17, 2020. (JOSH EDELSON/AFP via Getty Images)
Northern California

SANTA CLARA, Calif.—San Francisco continues to face a drug overdose epidemic, as the number of overdose fatalities in 2020 was nearly triple the number of COVID deaths.

The city’s data reveals there were a total of 713 deaths from overdoses, compared to 261 COVID-19 deaths last year.

“Bad is an understatement. I would say it’s horrific, it is negligent, it is an epidemic in and of itself, and it was not always this way,” Jenny Shao, a freelance multimedia video journalist and San Francisco native, told NTD Television.

She says drug overdoses have been an ongoing crisis for the city but have gotten much worse over the past five years.

“Before, you were able to walk through the streets … and you did not have to try and tiptoe over bodies, not knowing whether they were dead or alive.” Shao said.

“And, also, you did not have to hopscotch through anything like drug paraphernalia … and you were not literally walking through a scene, of say, ‘The Night of the Living Dead,’” she said.

One drug addict’s mother has described it as a “Zombie Apocalypse.” Her 32-year-old son is addicted to fentanyl, which has left him homeless and physically “bent over” so that he “walks like an old man.”

People have also described the city as like a Third World country, with human waste and needles littering the streets. City officials have made efforts to tackle the problem.

According to one report from the Department of Public Health, San Francisco distributes 4.45 million needles every year to drug users.

In July, San Francisco Mayor London Breed announced the city planned to invest $13.2 million to prevent drug overdoses. The plan seeks to open centers to provide beds and treatment for the intoxicated and expand access to buprenorphine, an opioid used to treat opioid-use disorder.

Recently, city officials have pushed to open safe injection sites as part of their overdose prevention program, which could start as soon as next spring.

But according to Shao, not a single center offers alternatives to drugs. She said that’s like putting a Band-Aid on the problem and “fast-tracking a way to self-destruction.”

“The idea is sobriety, and that’s the golden key,” she said. “You do not want to be dependent on these drugs. And from what I understand of these harm-reduction sites—as the city likes to call them—is that you are putting yourself at less risk, of say, overdose or harm. But, nevertheless, you are still locked in that state of constantly abusing yourself. And, so to speak, teetering on the border of death.”