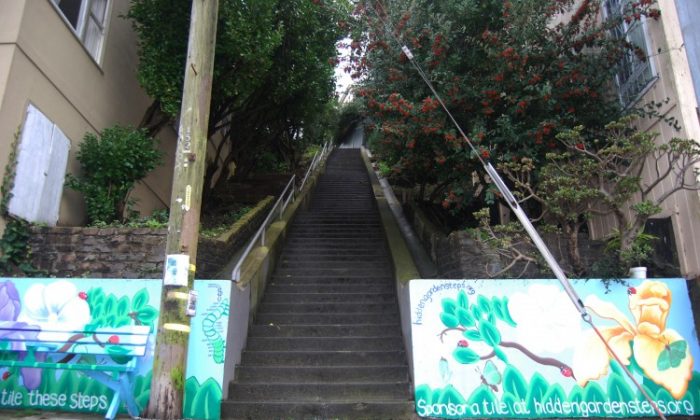 People enjoy the view from the 16th Ave. Tiled Steps, on Moraga Street in the Inner Sunset District. (Catherine Yang/The Epoch Times)
US

A long, dark staircase between two buildings, overhung with trees, will soon be covered in oversized, bright poppies, butterflies, and a winding salamander spanning two flights of steps. Graffiti and litter have been cleaned away weekly by volunteers, and passersby no longer leave behind unwanted marks, lingering instead and enjoying the area. Inner Sunset plans to transform the staircase, tile by handmade tile, into a 148-step statement about the community.

This “Hidden Garden” project held its first mosaic tiling workshop on Saturday, where residents of the Inner Sunset District helped piece together the design that will eventually brighten up the stairs.

The project is based on the “16th Avenue Tiled Steps,” a 163-step staircase on Moraga Street, which was started in 2003 and finished in 2006 with the help of 300 neighbors and various groups. The Moraga Street steps were inspired by the Santa Teresa Steps in Rio de Janeiro, Brazil.

“I love the original steps,” project co-director Paul Signorelli, who lives just doors away from the current project, said of the Moraga Street staircase.

“I fell in love with the idea of trying to do something like they’ve done on the Moraga steps, and I ran into the artists. In a crazy moment, I looked at them and said, ‘Well, have you thought about doing another one?’ and they said, ‘Oh, we’d do it in a heartbeat.'”

Artists Aileen Barr and Colette Crutcher met when the project directors of the Moraga Street steps asked them to collaborate.

“This was not something commissioned by the Arts Commission, it’s just something that people in the neighborhood wanted to make happen, so it happened,” Crutcher said.

“It makes the place beautiful, it becomes an attraction for people to see, it brightens up the neighborhood,” Barr said. “It’s so important to the health of the community.”

“The community’s just been so supportive and so great,” Crutcher said. With the Moraga Street steps project, the attendance increased with each workshop, as did neighborhood support. “More people knew about it each time, it definitely snowballed.”

The inception of the Moraga Street project took place before Facebook, before Twitter. Even in the same neighborhood, some residents said they didn’t find out about the project until it was almost over and wished they had been involved.

“[We’re] taking advantage of face-to-face in our community neighborhood and also of a much broader audience through … any social media we can,” Signorelli said. “We got started and people are saying, ‘Oh, why don’t we do other steps in the neighborhood?'”

“It strengthens the existing community, and it redefines the whole sense of what the concept of a community is,” Signorelli said. The project’s outreach has garnered out-of-state sponsors from seven different states and has reached as far as the United Kingdom.

“And how often do you get to do something like this?” Signorelli said. “It’s the heart of the project.”

Leena Krasno, who lives right between the decorated and soon-to-be decorated steps, said she had gotten involved on a small scale with the previous project, and it turned out to mean much more to her and her family than she imagined.

“People need beauty in their lives, and I think beauty in the community is essential for a community to feel good about itself, to be inspired, to just feel that beauty,” she said. “People need that, and when they’ve done something together, and they can go and look at it, it’s so inspiring.”

Day or night, there always seems to be someone on the decorated Moraga steps—just walking, talking, sitting, or enjoying the view.

“It is really special,” Krasno said. “When I walk by every day with my dog, there’s someone on those steps, and I know what it must mean for the people. You have to be able to have that to be human beings, to have sort of a spiritual, an inspirational beauty around you. I think that’s very important.”