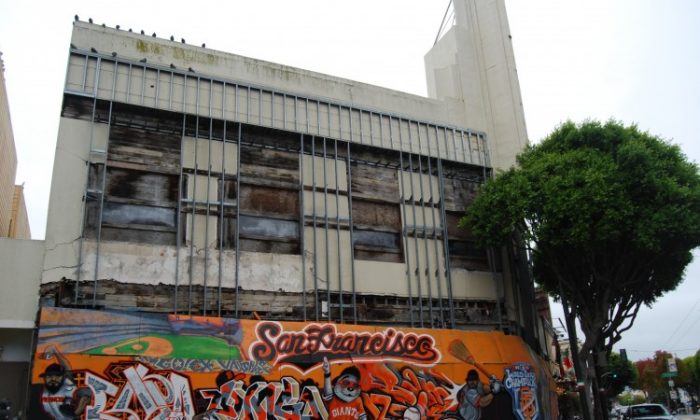 SAN FRANCISCO—San Francisco’s Municipal Transportation Agency (SFMTA) is modifying part of its plan for the Central Subway Project that sparked opposition and lawsuits from North Beach residents. The original plan was to extract underground drilling equipment 2000 feet beyond the approved tunnel on Columbus Ave. between Filbert and Union Streets. Critics charged that that amounted to extending the subway without doing any environmental studies.

Now the city is considering alternative plans. One plan is to buy the nearby defunct Pogoda Theater and extract the drilling equipment there. That plan would still extend the tunnel, but it is more popular with local residents. The current theater location could serve as a future subway stop.

The Pagoda Theater, which opened as the Washington Square Theater in 1909, was purchased with hopes of redevelopment by Joel Campos in 2004. With talks of buying Pagoda Theater underway, the Central Subway project may have one less lawsuit to worry about.

“I’m completely in support of the subway,” said Marc Bruno of Save North Beach, the organization filing a lawsuit against the project. “As soon as we know there won’t be any construction on Columbus [Ave.], we can retract the lawsuit.”

Bruno is optimistic about the deal and has marked the deadline in his calendar. SFMTA program director John Funghi announced in a forum that he started discussions with the theater owner Sunday, and talks will continue through the week. The presentation of alternative construction plans to the SFMTA Board will take place on Feb. 5, 2013.

There is a dental office on one side of the theater and an Italian restaurant on the other.

“Those buildings will not be harmed, we will do everything to have them stay intact,” Funghi said.

Howard Wong from SaveMuni, the other group suing to stop the current project plan, says his concern is not just with the tourism traffic, but the projected change in demographic that could be brought on by the Central Subway.

While the subway makes for an easy transfer to and from the Caltrain for commuters, “it drives out the lower and middle class,” Wong said. “It will drive up development and land costs. It’s something we have to be very careful about; any subway means higher density and greater gentrification.”

One of SaveMuni’s biggest problems with the estimated $1.6 billion Central Subway project is the cost (which Funghi calls a “simple restoration project” to give the area back the public transportation support it lost out in the 1950s to the automobile boom). But, grievances aside, there seems to be a consensus that the project will in fact be completed.

“I do think moving construction to the Pagoda Theater as opposed to on Columbus Ave. is a better alternative,” Wong said. “But in the long run it is not beneficial to the city.”

Dario Hadjian owns Piazza Pellegrini which is right next to the Pagoda. He says that regardless of whether the construction takes place at an intersection or the building next door, his business will be gone.

“It [a subway line] will be good for my children, but I won’t see any of the benefits,” Hadjian said. “We can only hope the city will be kind to small businesses.”

According to Funghi, there is $200 million in the budget allocated toward small businesses. But talks with the community have been vague, said Hadjian, and he doesn’t yet know what that would mean for him.

For environmental clearance reasons, the plan does not include a subway stop at North Beach. Paolo Crismani, owner of Mario’s Bohemian Cigar Store Café across the street from the Pagoda says a subway stop isn’t something the neighborhood wants.

“It’s a walking city,” Crismani said. Other groups and critics of the subway line have also expressed concern regarding tourism. The worry is that tourists at the Moscone Center will hop on the subway line and ride it straight to Fisherman’s Wharf, foregoing the walk through Chinatown and North Beach, which is what local businesses want.

Another alternative includes leaving the tunnel boring machines (TBM) underground—which North Beach also approves of—though it would become an obstacle should there be a North Beach subway station built in the future.