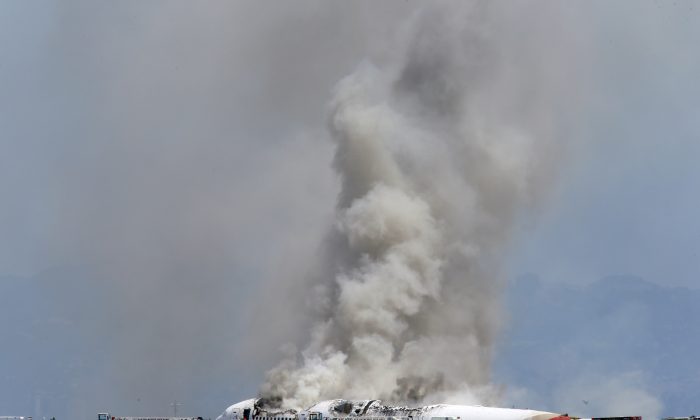 SAN FRANCISCO—One person remains unaccounted for, in total 181 people were taken to hospitals, most of them with minor injuries, said authorities Saturday evening.

Two people are confirmed dead said the city’s Fire Chief Joanne Hayes-White at a press conference at the airport.

The Asiana Airlines flight originated in Shanghai, China with a stopover in Seoul before it crash-landed at SFO.

The FBI has now taken over the investigation. “At this time, there is no indication of terrorism involved,” said FBI agent in charge David Johnson. “We will do all that we can to find out what occurred,” he said.

San Francisco airport was shut down for hours after the plane crashed. The airport is currently operating with limited arrivals and departures, two of the four runways are back in operation. Airport authorities are urging passengers to check with their airline the status of their flight before coming to the airport.

It is unclear what caused the crash, reported AP, but eyewitness Stephanie Turner said that “the tail of the plane hit the runway, and it cartwheeled and spun.”

“You heard a pop and you immediately saw a large, brief fireball that came from underneath the aircraft,” Anthony Castorani, who saw the crash from a nearby hotel, told CNN. “It began to cartwheel.”

Earlier in the day the California Highway Patrol’s Golden Gate division tweeted that “all access to SFO is closed except emergency personnel. Traffic in the area is heavy-avoid US 101 and utilize I-280.” The SFO’s home page was also down as of 4 p.m. on Saturday, presumably due to the high traffic.

The National Transportation Safety Board on Saturday told AP that it would investigate the cause of the crash.

Twitter erupted on Saturday with reports that a plane crashed at the San Francisco International Airport (SFO).

Photos taken from other planes uploaded to Twitter and Instagram showed smoke billowing from the purported crash.

“Literally just witnessed a plane crash (SFO) start to finish..cannot stop crying,” said one witness. “Huge crash on SFO. I hope and pray everyone on that plane and facility is ok,” wrote one user. Another said that “plane on fire moments ago at SFO airport.”

AP reported that passengers were forced to jump down to the runway via inflatable slides.

Article continues below the discussion.

Federal Aviation Administration spokeswoman Laura Brown said the plane was supposed to land on runway 28. She said details were still sketchy but noted the plane appeared to have landed and crashed soon after.

Fire crews were deployed on the scene and sprayed fire retardant on the plane.