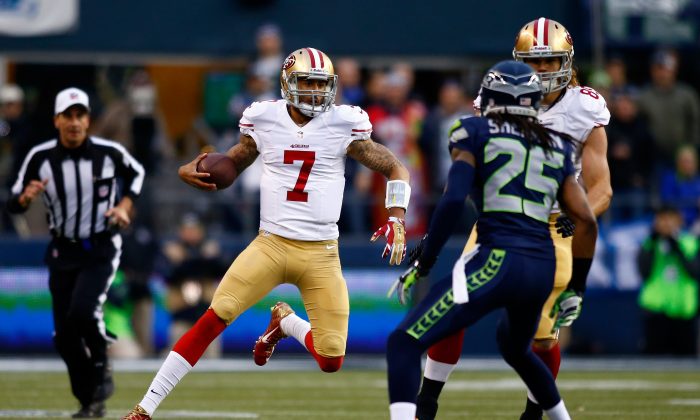 Quarterback Colin Kaepernick #7 of the San Francisco 49ers runs the ball in the first half against the Seattle Seahawks during the 2014 NFC Championship at CenturyLink Field in Seattle, Washington, January 19, 2014. Kaepernick’s 98 yards rushing gave San Francisco the edge. (Jonathan Ferrey/Getty Images)
NFL

The NFC Championship matchup between the Seattle Seahawks and the San Francisco 49ers was interesting to consider: the best defense in the NFL against a 24th-ranked offense led by a triple-threat quarterback, while the 49er defense was ranked a very respectable fifth, and the Seahawks offense, 17th.

Both quarterbacks were threats—Russell Wilson of the Seahawks was great throwing long in the first two-thirds of the season and not unwilling to run, and Colin Kaepernick of the 49ers could throw well and also could take off running at any moment.

On the field, the game started to unfold about how the numbers would predict: Seattle’s defense shut down SF, and the 49ers defense stifled the Seahawks offense sacking Wilson twice in the first quarter and twice more in the second.

The quarterbacks made the difference. Colin Kaepernick rushed—personally—for 98 yards (the rest of the team managed only 13), while Russell Wilson threw a 51-yard pass to set up the Seahawks for their only points. SF gained 127 yards total, and Seattle 148.

Up until halftime, at least, San Francisco had the better defense/offense matchup, and Seattle couldn’t contain Colin Kaepernick.

On the first play from scrimmage, Seattle quarterback Russell Smith was sacked and fumbled. San Francisco recovered on the Seattle 15-yard line.

Well, it could have been worse—the 49ers could have scored. As it was Seattle woke up quickly, and held the 49ers to a field goal—about the best they could have hoped for, considering.

It didn’t get much better, as the Seahawks went three-and-out on their first drive.

The officials were letting both teams play, and both teams were playing dirty. Late hits, grabbing, holding, face-masking … Seattle was the most-penalized team in the league during the regular season, but San Francisco proved they were just as able.

Colin Kaepernick finally broke the stalemate three minutes into the second quarter with a 58-yard run to the Seattle ten-yard line. Frank Gore hammered his way to the one, and Anthony Dixon dove over the pile to score—or so he thought, until the review revealed that he landed a foot short. Dixon leapt a little higher on the next play, giving San Francisco a 10–0 lead.

Russell Wilson tried to do the same for Seattle with a 51-yard pass to the SF 11, but San Fran held tough and Seattle had to settle for three.

On the final drive of the quarter Seattle had a chance to either kick a fifty-plus yard field go or go for it on fourth-and sixth. San Francisco chased Wilson around the field, forcing him to throw an uncatchable pass. San Francisco took over on downs and took a seven-point lead to the locker room.