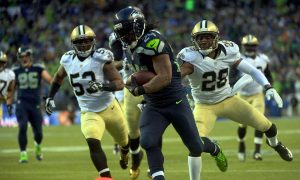 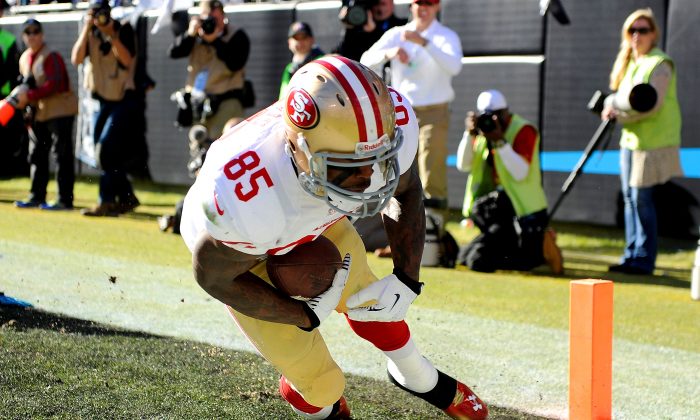 Vernon Davis #85 of the San Francisco 49ers catches the go-ahead touchdown in the second quarter against the Carolina Panthers during the NFC Divisional Playoff Game at Bank of America Stadium on January 12, 2014 in Charlotte, North Carolina. (Grant Halverson/Getty Images)
NFL

The San Francisco 49s went to the locker room with a three point lead over the Carolina Panthers in their NFC playoff matchup at Bank of America Stadium in Charlotte, North Carolina.

San Francisco versus Carolina is a matchup of two great defenses: Carolina finished the regular season second in the league in fewest yards and points per game surrendered; San Francisco, fifth.

The matchup promised a lot of offensive fireworks in an ultimately defensive struggle, and in the first half, that’s how it developed.

On their first drive San Francisco showed decent offensive capabilities, gaining three first downs in 13 plays, but even helped by a miscalled penalty couldn’t get to the end zone. Kaepernick was ultimately sacked on third-and-ten which forced a successful 49-yard field-goal attempt.

Cam Newton threw an interception to end the first Panthers drive, but the Panthers defense held San Francisco to another field goal.

On their next drive Carolina found success with their running game. After a 16-yard kickoff runback, the Panthers followed up with runs of 28, 7, 14, and 11 yards to get the panthers to first and goal on the SF six.

Here the 49ers showed their defensive grit, stopping Cam Newton and the panthers on four successive attempts. The Panthers could have—maybe should have—settled for three, but apparently Carolina coach Ron Rivera had faith in his defense.

That faith was well-placed. San Francisco couldn’t gain a yard, and ended up punting from its own end zone.

Ted Ginn returned the punt 24 yards to the 49ers 31, and on the next play Cam Newton threaded a pass past cornerback Tarell Brown to WR Steve Smith for a touchdown, giving Carolina a 7–6 lead.

After completing a 20-yard pass to Anquan Boldin, Carolina shut down Kaepernick was shut down and SF had to punt it away after four plays.

Here, early in the second quarter, Newton took over the game. With excellent play fakes and his own swift feet Newton (running for six and 11 yards) kept the 49ers off-balance. Newton then uncorked a pair of passes, 35-yard pass to TE Greg Olsen and nine to Steve Smith to get deep into the red zone.

Newton ran for six yards on first-and-goal from the seven, got stopped on his next run attempt, then after Ahmad Brooks jumped about four feet in the air offside, the 49ers stopped fullback Mike Tolbert, forcing Carolina to settle for three.

Kaepernick got his aerial attack online during the next series, completing passes for 12, 14, 20, and 15 yards to reach first-and-goal from the nine with less than a minute left in the half.

On third and nine, cornewrback Drayton Florence got called for pass interference which gave the 49ers first-and-goal at the one. On second and goal Vernon Davis caught a pass in the corner of the end zone and was riles out-of-bounds despite apparently getting both feet in. 49ers coach Ken Harbaugh was then called for Unsportsmanlike Conduct, a 15-yard penalty, for his vociferous protests..

On review the score was allowed, giving San Francisco a three-point lead.