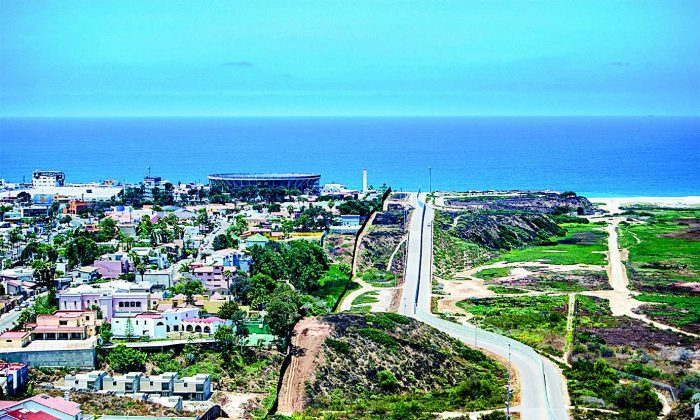 The U.S.–Mexico border on July 12, with homes in Tijuana, Mexico, adjacent to the original barrier, to the left; a secondary fence with barbed wire and San Diego are to the right. (Joshua Philipp/The Epoch Times)
US News

SAN DIEGO—The county once known as “ground zero” for illegal immigration in the United States has become a model of successful border security that the rest of the country is now looking to emulate.

This began, fittingly, with a wall—or to be more precise, a crude barrier of sheet metal supported by metal poles. This original barrier wasn’t meant to stop people. It was initially just meant to stop cars and trucks carrying migrants and drugs into the United States.

Yet this barrier triggered a process of trial and error with border walls that, over the course of 2 1/2 decades, has reduced the number of apprehensions of illegal aliens in San Diego from more than 628,000 in fiscal 1986 to its current number of around 30,000 a year.

Tekae Michael, a San Diego Border Patrol agent, stands in Otay Mesa at the eastern end of the 46-mile-long barrier—which falls almost 15 miles short of covering the 60 miles of border in San Diego. From the south, roosters crow and the occasional shout can be heard from the sprawl of concrete and tin homes in Mexico. To the north, the occasional Border Patrol jeep can be seen in the Otay Mountain Wilderness.

“Before this primary fence was built, migrants were coming north with no fencing, no barrier to stop them,” Michael said, noting that before they began constructing the initial barrier in 1991, people were “driving basically straight on through the border.”

“So this primary fence was built to stop those huge loads of people and narcotics,” she said.

These days, it’s relatively quiet. Michael notes that on this tour of the border wall, it’s unlikely we’ll encounter many people trying to cross illegally—something that would have been a common sight in the 1980s and ’90s.

San Diego was once the primary hub for illegal immigration and drug smuggling from Mexico. When the initial wall was first being erected in 1991, according to Border Patrol statistics, there were 1,132,033 apprehensions of illegal immigrants across the United States—and close to half of those apprehensions were in San Diego.

Michael is quick to note that the initial wall wasn’t necessarily meant to stop illegal crossings, and the 6-to-8-foot-tall wall didn’t accomplish that goal either. Instead, it was meant to end the state of relative anarchy that once existed along the San Diego border with Mexico.

According to Michael, the model that worked in San Diego was a combination of the border fence, an uptick in the number of agents (from around 500 in the ’90s to 2,400 today), and the addition of better technology. The combination of these resources, she said, “has definitely proven to be successful to San Diego sector.”

Traveling from the eastern end of the wall to its western end in the ocean is like taking a trip through time, following the wall’s development as lessons were learned and the barrier was perfected. At the eastern end, the wall is rusty and covered in spray paint. Farther up the road, a second fence emerges that gradually changes in form, leading to the model of bollard-type fencing that may soon stretch the full length of the border.

Mexican homes built to the edge of the original barrier now use the barrier as their backyard fence, with piles of litter on the American side from people dumping their garbage. Just north stands the secondary fence, with barbed wire at the top and patched holes covering the bottom where illegal migrants have cut through.

On either side of the secondary fence are service roads, lit by stadium lights and patrolled by the occasional border agent in a jeep or on a motorcycle.

The place we stand in was once known as the “Soccer Field,” one of the main hubs for illegal crossings and a location that was once even too dangerous for Border Patrol agents to enter.

“This area we’re looking at right here, it was very infamous in the ’80s and ’90s,” said Michael. “We did not have primary fencing infrastructure and secondary fencing—this was pretty much open.

The area got its name from before the barriers were erected. Migrants would come here to play soccer, and local vendors would sell food, drinks, and ice cream. Then, when night came and the day’s games ended, those who came for the day would head back south, and those who wanted to illegally enter the United States would head north.

“It was extremely dangerous for Border Patrol to actually patrol the border down here,” she said. The San Diego sector had only 500 agents, who were dealing with “thousands and thousands of migrants that were physically here on the border.”

Due to the dangers of the job, Michael said, “our Border Patrol agents would sit up top, north of the ridges, and basically have to wait for migrants to come north and try to apprehend them over there.”

The initial border barrier worked in stopping vehicles from driving through, but did little to hinder people crossing on foot.

This began changing in 1996, when Congress authorized the construction of a 14-mile-long, triple-layer fence along the U.S.–Mexico border in San Diego, according to a 2007 report from the nonpartisan Congressional Research Service. Although only 9 miles of the fence were completed by 2004, it had an immediate effect.

Part of this, the report states, was designed to reroute illegal crossings, turning them away from populated areas, where people crossing illegally can easily blend in with their surroundings, and instead pushing them to cross in the countryside where Border Patrol agents have an easier time apprehending them.

Of course, the fence itself has also gone through several iterations, changing through years of trial and error.

One of the initial models featured a secondary fence with a top portion that was bent southward. Illegal migrants began placing ladders against the top to climb over, and Border Patrol also found that some who climbed up weren’t able to climb down—resulting in people jumping or falling from the top and injuring themselves.

In response, the fence was straightened and concertina wire was installed along the top. This led to illegal migrants cutting holes along the bottom of the fence or throwing mattresses over the wire. Border agents also began having problems with illegal migrants who would perch on top of the fences and lob rocks and other objects at them.

In 2008, there were 377 assaults on agents in San Diego. In the areas where the attacks were most severe, Border Patrol began placing concertina wire along the top and bottom of the secondary fence. They also began arming agents with less-than-lethal weapons, including pepperball guns and tasers.

The main objective of the border barriers was to encourage people to take the legal route when entering the United States.

“Obviously, if you want to become a United States citizen, we encourage you to do so the legal way—and there is a legal way to do it,” Michael said.

“I think in the desperation that people have to come north and live in America, they choose the smuggling route because they feel like maybe that’s the only option they have,” she said. “That’s not the case.”

The San Ysidro Port of Entry is the main legal checkpoint between San Diego and Tijuana. According to the Transportation Bureau, more than 14 million vehicles and 7 million pedestrians crossed here in 2015, making it the busiest land border crossing in the world.

According to Michael, just decades ago the situation was very different. She said, “This area, this was a free-for-all.”

“During the ’80s and ’90s, there were what was called ‘Banzai Runs,'” she said, in which “tens or hundreds of people would actually run straight up through the port of entry, and run straight north on the freeways.”

“There was nothing there to stop them, and they just basically overpowered agents and officers working the port of entry,” she said. “Border Patrol agents weren’t able to chase them because it would be into freeway traffic. So it was extremely dangerous but effective, because they would be able to just run north and blend in.”

Today, the area has housing developments and shopping centers, with some on the American side, such as the Las Americas Premium Outlets, built right up against the primary border fence.

“The business owners would not have their businesses right up on the primary fence if they did not feel safe,” Michael said. “People actually living here in the neighborhoods, they do feel secure in this area because we have been able to secure it with the infrastructure, the manpower, and the technology that we have.”

Smuggling is still an issue, but while apprehensions of illegal crossings have gone down, seizures of drugs have gone up—a success in the eyes of law enforcement. According to Border Patrol statistics, in 2006 it seized just 699 pounds of cocaine, but in 2017 it has already seized 2,227 pounds.

Today, however, the human trafficking and smuggling operations have become a complex business, run by criminal cartels that operate on both sides of the border.

Not far up the road is an area that was once notoriously known as “Smuggler’s Gulch.” A small river runs down the center, and large hills on either side once made it difficult for Border Patrol agents to bring vehicles into the area. At times, fog rolls in thick from the ocean, bringing visibility down to just several feet.

The area got its name in the 1920s during the Prohibition. People used to smuggle alcohol from Mexico, bringing it through the gulch to waiting vehicles on a service road on the American side of the border.

Today, an all-weather road passes over the gulch, alongside the two layers of border fence.

Michael noted much of the smuggling has moved toward hidden shipments on boats, in vehicles crossing the border, or through large tunnel complexes that often lead into homes on either side of the border.

“When people and drugs are coming north, usually money and weapons are trying to go back south. So this smuggling cartel, it’s a business,” Michael said. “If we stop the money flow, which is the cartel’s lifeline, that’s beneficial as well. We don’t want money and weapons going back south.”

Just beyond the gulch, along the beach, stands the likely future of the border wall—the best-working model they’ve found. They call it the “PV-1” for its ability to stop both pedestrians and vehicles.

It’s an imposing structure of thick steel slabs that are hard to cut through, with spaces between them that make it harder to climb. Each metal piece also goes 4 feet underground, to stop basic tunnels. Michael says Border Patrol is hoping to eventually expand the PV-1 structure across the entire San Diego border, replacing the old, rusted first wall from 1991.

“We would love to be able to replace our primary fencing with this type of PV-1 fencing,” Michael said.

“Before, our primary fencing was just that landing mat that was only to stop vehicles. This is to stop pedestrians and vehicles,” she said.

“This has proven to be effective.”