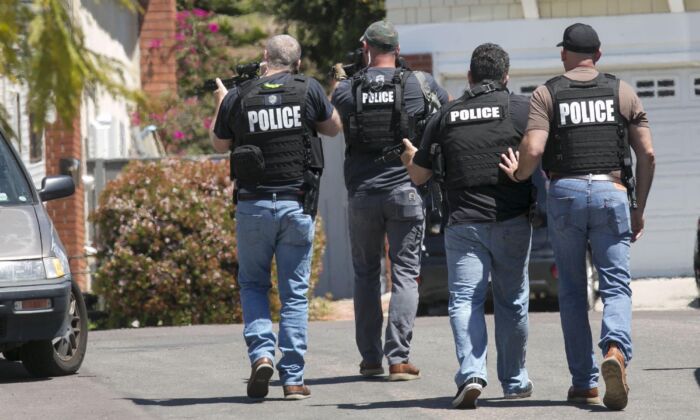 A 19-year-old California man suspected of being the gunman behind a mass shooting at a San Diego area synagogue claimed in an open letter published online he was motivated by last month’s Christchurch massacre.

The letter, containing racist and anti-Semitic language, was posted on the 8chan message board hours before the deadly shooting on Saturday, April 27, according to the Guardian, citing police sources.

The gunman, identified by police as John T. Earnest, is accused of opening fire inside the synagogue in Poway, wounding three people and killing one.

San Diego police cited by NBC said the letter had been posted in the name of the suspect, who was taken into custody after the shooting.

The letter contained anti-Semitic and racist language, the Guardian reported and its author claimed to be motivated by both last month’s New Zealand mosque shootings and the Pittsburgh Tree of Life synagogue massacre.

The gunman struck the Chabad of Poway synagogue exactly six months after the Pittsburgh shooting that killed 11 people.

The letter is said by authorities cited by NBC to be similar in tone and format to the one written by the gunman in the Christchurch attacks, which left 50 people dead.

Both the Pittsburgh gunman Robert Bowers and the Christchurch shooter Brenton Tarrant are listed in the letter as a direct inspiration for the shooting.

Police said the deadly shooting took place during Passover services at Chabad of Poway, about 20 miles north of San Diego, when a gunman entered the synagogue and opened fire “with an assault-type rifle.”

San Diego County Sheriff Bill Gore said in a media briefing that police were called to the Poway synagogue just before 11:30 a.m. in response to a shooting.

He said an off-duty Border Patrol agent at the synagogue fired a weapon in the gunman’s direction but missed. The suspect escaped, fleeing the scene by vehicle, which was struck by a bullet.

The sheriff said in the press briefing that “detectives are also looking into the authenticity of online claims he wrote a manifesto.”

Gore said that four people—including a child—were wounded in the shooting and were all rushed to a hospital.

Gore said one woman later died from her injuries.

He cited doctors as saying that the remaining victims “are doing well.”

“A rabbi underwent surgery after suffering gunshot wounds to his hands,” Gore said, adding, “A 34-year-old man and a child were hit by shrapnel from bullets.”

He said an autopsy would be performed on the deceased victim to determine the exact cause of death.

“The Sheriff’s Department expresses its sincerest condolences to those affected by today’s incident,” Gore wrote. “Our hearts go out to those going through this difficult time.”

A Palomar Medical Center Poway representative told CNN earlier that they were receiving one trauma patient from a shooting at a synagogue.

The representative added that they were expecting as many as four patients, reported the news broadcaster. The nature of their injuries is not immediately known.

Gore also confirmed on Twitter that the wounded have been taken to the medical center.

“Those wounded in the Chabad of Poway synagogue shooting were taken to Palomar Medical Center PalomarHealth. Please respect the medical privacy of victims & their families during this difficult time,” the sheriff wrote.

President Donald Trump expressed his condolences in a message on Twitter.

“Thoughts and prayers to all of those affected by the shooting at the Synagogue in Poway, California,” Trump wrote. “God bless you all. Suspect apprehended. Law enforcement did outstanding job. Thank you!”

Thoughts and prayers to all of those affected by the shooting at the Synagogue in Poway, California. God bless you all. Suspect apprehended. Law enforcement did outstanding job. Thank you!

Gore said extra patrols were being provided at places of worship over the weekend.

He called on people to report suspicious activity and said, “we encourage the public to remain vigilant.”