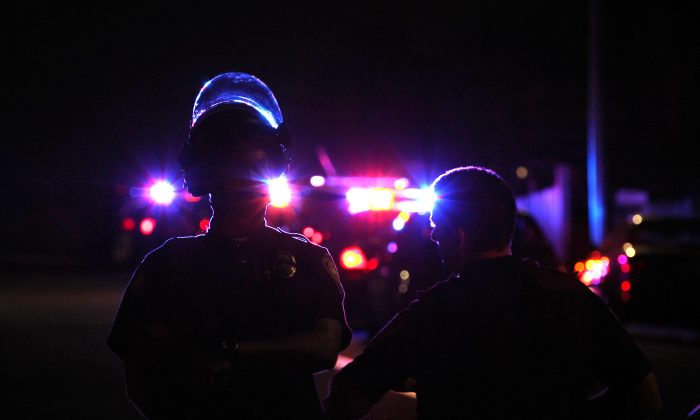 In this file photo, San Diego police and other law enforcement stage near a crime scene in San Diego on July 28, 2016. (John Gastaldo/The San Diego Union-Tribune via AP)
Southern California

SAN DIEGO—Police were asking the public’s help today in an investigation into the shooting death of a 12-year-old boy who was in the backyard of a family gathering on Thanksgiving Day.

The shooting happened at 9:34 pm Thursday in the 7400 block of Cahill Drive in the Skyline neighborhood, according to Lt. Jud Campbell of the San Diego Police Department.

When officers arrived, San Diego Fire-Rescue Department units were already on the scene and rendering aid to the boy, who had trauma to his upper body, the lieutenant said.

“It has been confirmed that, at the time of the incident, the 12-year-old was in the backyard at a family gathering for Thanksgiving,” Campbell said. “He was struck by a single bullet that came from east of his
location.”

Paramedics took the boy to a hospital, where he died.

Police homicide detectives have been investigating the circumstances surrounding the death.

“The primary issues for the investigators are the origin of the bullet and whether it was fired intentionally,” Campbell said. “All possibilities are being considered as investigators work through the evidence and leads.

“Members of the community may have information that would lead to solving this case and bringing closure to the victim’s family,” Campbell added. “Even the smallest piece of information could be relevant and critical to the case.”