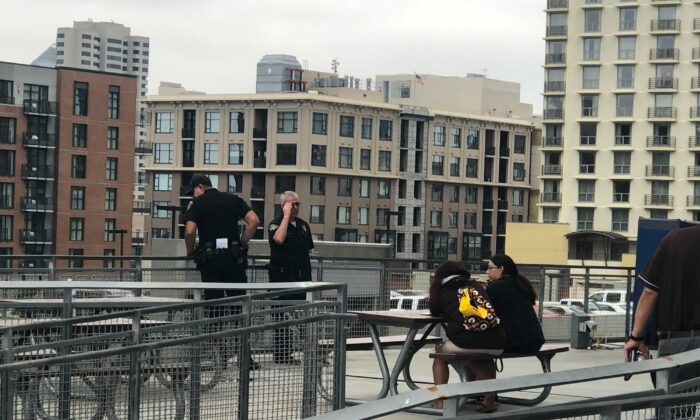 A San Diego police officer looks over side of the Petco concourse after a woman and child fell to their deaths in San Diego, on Sept. 25, 2022. (Gary Robbins/The San Diego Union-Tribune/TNS)
US News

SAN DIEGO—A police investigation has concluded that a San Diego mother intentionally killed herself and her 2-year-old son last September when they fell off a six-story concourse at Petco Park before a Padres game, a homicide lieutenant said Wednesday.

An attorney for the woman’s family said police have provided no explanation of what led investigators to a homicide-suicide conclusion. The attorney said he believes the San Diego Police Department is trying to shield the city—which owns Petco Park—from liability in the deaths of the mother and her son.

Raquel Wilkins, 40, and Denzel Browning-Wilkins died Sept. 25, just before the start of the Padres’ penultimate home game of the season, when they fell from the third level of the ballpark just as thousands of fans were heading inside, San Diego police homicide Lt. Andra Brown said in a statement last year.

Police labeled the deaths “suspicious” and launched a homicide investigation.

Brown said detectives came to the homicide-suicide conclusion after “detectives conducted a thorough and comprehensive investigation that included dozens of interviews, reviewing of available video footage, and collecting background information to determine what led to the deaths.”

Attorney Dan Gilleon represents Wilkins’ father, mother, and sisters, and said Wednesday that police have “refused to provide us an ounce of information” and “flat out refused to explain” how they concluded Wilkins killed herself and her son.

Gilleon said the police conclusion is a defense for the city against impending legal action.

“The city of San Diego owns that ballpark, it is legally responsible, assuming that what caused her to fall was anything but her intent,” Gilleon said Wednesday. “The only way the city is not at fault is if she intended to kill herself and her baby.”

Wilkins and her son fell about 3:50 p.m. from the equivalent of six stories high to the sidewalk on Tony Gwynn Drive. While efforts were made to resuscitate them, it quickly became apparent that neither had survived, Brown said at the time. They were pronounced dead at 4:11 p.m.

They had been at a dining area on the concourse level before the fall, police Lt. Adam Sharki said last September. The child’s father, who Gilleon previously described as her fiancé, was at the ballpark at the time, police reported.