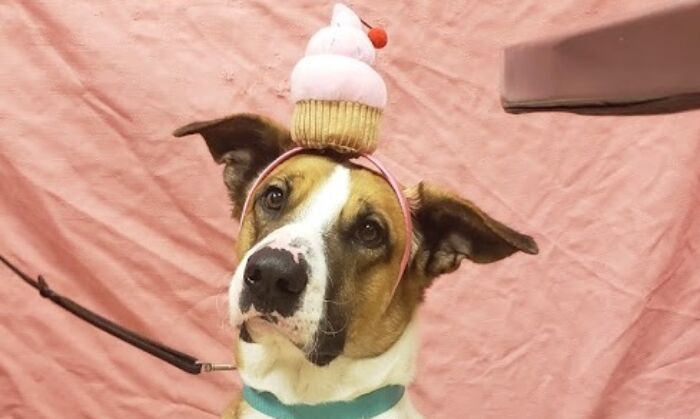 Held at the Pilar & Chuck Bahde Center for Shelter Medicine, the festive event included “a peanut butter cake, hats, cheers and, of course, lots of hugs and kisses for the star patient,” Humane Society officials said in a news release.

A 4-year-old St. Bernard/shepherd mix, Phoenix is considered “near and dear to the hearts of many staff at San Diego Humane Society.”

Colette Troughton, a San Diego Humane Society veterinary assistant who adopted Phoenix, described him as “a big dog with an even bigger personality.”

“He inspires me to see the good in everyone and I feel so lucky to get to spend my days with him,” Troughton said. “I am forever grateful for all the caretakers that showered him with love and made his recovery possible.”

When he arrived on Nov. 5, 2020, Phoenix was malnourished, flea-infested, and had missing fur.

Although the condition is serious if left untreated, veterinarians determined Phoenix’s prognosis would be good with Vincristine chemotherapy. Phoenix had received 13 treatments by January 2021. Doctors said most of his masses had decreased in size, but two remained and needed an alternative solution. Phoenix’s treatment regimen continued while veterinarians consulted an oncologist.

According to the Humane Society, Tansey made the commute twice to San Diego on her days off to provide treatment at no additional cost.

“Sometimes it truly takes a village to help the animals and that’s exactly what happened in Phoenix’s case,” said Danielle Clem, hospital director at the Humane Society’s San Diego campus. “Not only did we have an expert come from Los Angeles to help us, we had an incredible foster family who made sure Phoenix was comfortable in between treatments and the entire medical team at San Diego Humane Society involved in his care.”