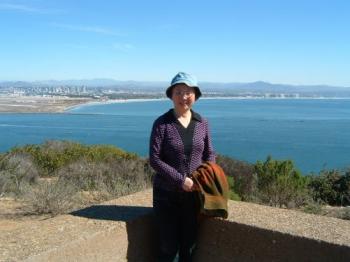 Ma Jinhua during her last visit to San Diego in 2005. She was sentenced Sept. 27, 2008 to one year of forced labor by Chinese authorities in Hefei City, China, for practicing Falun Gong. (Joanna Wang)
US

San Diego Resident Worried About Her Mother in China

56-year-old Ms Ma Jinhua, mother of San Diego resident Joanna Wang, was forcibly taken from her home in Hefei City, China on Sept. 4 for interrogation and "brainwashing" because she practices Falun Gong. Her daughter, Joanna Wang, a resident of San Diego and naturalized U.S. citizen, has been deeply distressed and concerned about her mother's whereabouts and treatment at the hands of Chinese authorities and has turned to her local San Diego government representatives for help in getting her mother released.

Ms. Wang says that the sudden detention is related to her mother practicing Falun Gong, a benevolent exercise and meditation practice that has been banned and severely persecuted in China since 1999.

“My mother had already obtained a visiting visa from the American Embassy in Shanghai and had bought her airline ticket,” said Ms. Wang. “It has been three years since I have seen my mom. We were looking forward to spending time together. She is a really good person and my best friend. Now I’m worried sick about her, wondering where she is and what they are doing to her.”

Congressman Duncan Hunter came to Ms. Wang’s aid. In a letter to Secretary of State, Condoleezza Rice, dated Sept. 17, he expressed grave concern for the unexplained detention of Jinhua Ma and asked for assistance in resolving the case.

Congressman Hunter said in his letter:

“Jinhua Ma is the mother of one of my constituents Joanna Wang, and was detained by the Chinese government on September 4, 2008 while in her home in Hefei City, Anhui Province, People’s Republic of China.  Her daughter believes that she was detained for reasons related to her practice of the religion Falun Gong. Jinhua Ma is currently being held at an unknown location by the Chinese government.  Several attempts by Joanna Wang’s father in China at gaining further information on the whereabouts or condition of Jinhua Ma have been unsuccessful.

“As an ardent supporter of human rights including the freedom of religion, I am outraged at the detainment of Jinhua Ma. The continued abuses by the PRC must be stopped and I would greatly appreciate your Department’s assistance in securing Jinhua Ma’s release.”

“As a member of the California State Assembly, I am concerned about the policy of the Chinese government towards practitioners of Falun Gong and would like to request your assistance in the case of Jinhua Ma.

“I respectfully request the immediate release of Jinhua Ma. I am hopeful that, in your position, you can help to secure her release and work to reverse the policy of the government of detaining practitioners of Falun Gong. By doing so you will be working to uphold the right of the Chinese citizens of freedom of expression and assembly, which are outlined in the Chinese Constitution.”

Brainwashing: Transforming Good People Into What?

Ms. Wang said that on the afternoon of Sept. 4, four days before her mother’s scheduled visit to the U.S., seven officers from the Hefei Security Bureau showed up at her mother’s home. They ransacked the home and took away her passport and Falun Gong books and tapes.

For six days her family in China was not given any explanation about her mother’s arrest, her whereabouts, or how she was being treated. And after three weeks they are still not sure what is going on with her. Ms. Wang says her father and brother in China feel powerless and scared.

Ms. Wang believes that the National Security Bureau has sent her mother to a brainwashing class to have her undergo “transformation,” basically to force her mother to renounce Falun Gong by any means.

“It’s really cruel and inhuman to ‘transform’ a person who believes in Truth, Compassion, and Tolerance. What are they trying to transform a good person into?” Ms. Wang asked.

“Falun Gong is wonderful and special. It teaches people to be good and honest, something that is hard to find in China today,” she said.

Hours after the conclusion of this interview with Ms. Wang, she contacted us by email to say that she received a telephone call from her father in China saying that her mother had been sentenced the previous day, Sept. 27, 2008, to one year forced labor.

She said, “Please let people know that I appreciate the freedom in America and that I am really grateful for the support from my US government officials. The Chinese people need help. The voices from government officials on all levels make a very big difference to the abused people in China. Without that it is quite hopeless. I also urge the people in this free land to condemn and to help seek an end to the persecution of human rights in China.”