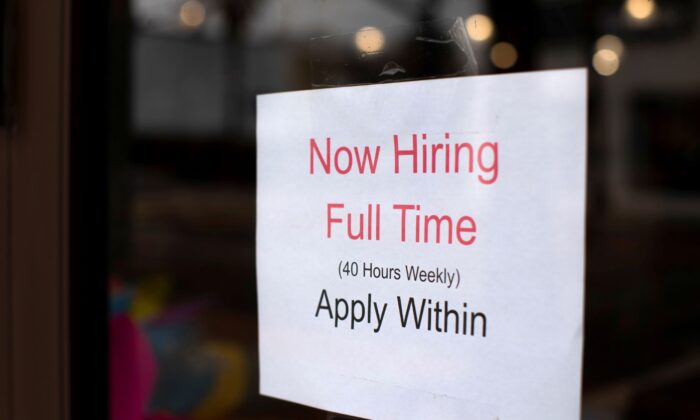 A retail store advertising a full time job on its shop window in Oceanside, Calif., on May 10, 2021. (Mike Blake/Reuters)
Southern California

SAN DIEGO—San Diego County’s unemployment rate decreased to 4.2 percent in December, down from a revised 4.6 percent in November and below the year-ago estimate of 8 percent, according to figures released on Jan. 21 by the state Employment Development Department.

Between November and December, nonfarm employment decreased by 1,200 to 1,457,100 according to figures from the Employment Development Department. Agricultural employment contracted by 800 to 8,400.

Construction had the largest month-over-month decline with a loss of 2,400 jobs. Seven other industries reported a loss, including educational and health services down 2,100, leisure and hospitality down 1,300, government down 800, financial activities down 600, manufacturing down 500, other services down 400, and mining and logging down 100.

Professional and business services posted the most significant month-over payroll increase with 4,100 jobs added. Additionally, trade, transportation, and utilities increased by 2,500 jobs, and information recorded an employment gain of 400.

Despite the overall decline in employment, local economic experts said that the San Diego region actually added around 4,200 jobs—after typical seasonal changes were taken into account.

“People should not overreact to the headline,” said Lynn Reaser, chief economist at Point Loma Nazarene University. “December typically sees a pullback in such industries as construction and hospitality. Although the report may indicate some red flags, companies’ major problem continues to be finding enough workers.”

A trend of workers quitting their jobs and staying out of the workforce longer typically has compounded problems for employers otherwise.

“Underscoring the continued demand for employees, temporary help and employment service firms saw further hiring gains,” said Phil Blair, executive officer of Manpower West, a company specialized in providing job searching and training services. “The growth in professional services and biosciences and research hiring is encouraging for the San Diego economy since these are high-paying jobs.

Blair also added that employment dropped in construction possibly due to the holidays and the Omicron surge.

The largest gainer was leisure and hospitality, with 37,600 jobs added to payrolls between December 2020 and December 2021. Of those, 32,000—over 85 percent—were in accommodation and food services.

“Despite a normal seasonal dip in employment, our region continued its recovery from the pandemic recession, with bright spots in retail and professional services,” said Daniel Enemark, senior economist at the San Diego Workforce Partnership. “Whether you’re just getting a start in the world of work or aspiring to a high-paying career, there are significant opportunities across the labor market.”