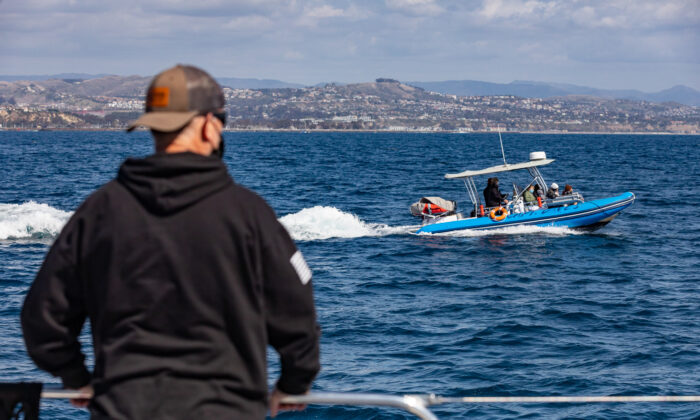 Donna Kalez, operator of Dana Wharf Sportfishing and Whale Watching in Dana Point, said the regulations by CARB consist of installing engines that are more environmentally friendly but are unavailable and nonexistent, and could result in a decline of commercial boats able to operate daily to and from Catalina, amid other activities.

“Dana Wharfs Sportfishing and Whale Watching has 17 boats in our fleet,” she said. “We employ 50 to 75 employees, and we see over 50,000 visitors annually that go whale watching and sportfishing. We also donate numerous trips to schools, military, special needs, veterans.”

“We’re working waterfront, all the way from San Francisco, all the way down to San Diego,” Kalez said. “So if you can imagine if you take all of those sport fishing boats out and whale watching boats, along with ferries that go to Catalina Island … [it] would have a huge impact on our economy.”

Ken Franke, president of Sportfishing Association, stood in support of Kalez and the commercial boat industry, saying that the costs to install new engines would be millions of dollars. While Franke is willing to abide by CARB’s desired equipment, he insists that until the technology is made available, boats should continue to operate.

“What they’re prescribing is basically the end of an industry,” Franke said.

“The technology will come in—at that point, we’d be more than happy to go and put it on the boat. Until such time as that, we’ve asked CARB to continue to permit the boats to operate. And then as equipment becomes available, then we talk about upgrading the vessels.”

Mayor Kathy Ward said: “This time frame is for things that don’t exist yet. … I’m wondering what Avalon, on the island of Catalina, even thinks about this, because no one’s going to be able to go—except anyone that has their own boat—to Avalon, and so essentially their industry over there is going to be done.”

Mayor Pro Tem Gene James recalled when, over a decade ago, renditions of requirements from the state resulted in boat owners having to change their engines, and drill holes through them so they were never sold or used again.

As the proposed regulations threaten the livelihood of residents, James calls to take a stand to prevent the proposal from coming to fruition.

Councilman Steve Knoblock urged that a letter be sent in opposition to CARB’s proposed standards, and he insisted it also be sent to local senators and congressmen.

With the technology requested by CARB remaining nonexistent, it was determined that the proposed regulations were unreasonable and that they would have a “tremendous negative economic effect on the boating industry.”