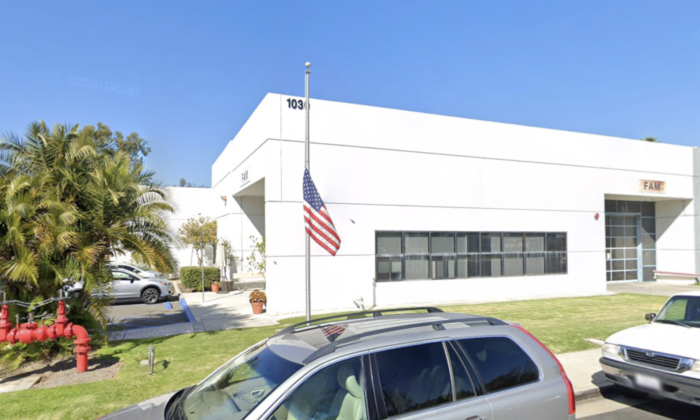 The Family Assistance Ministries, a nonprofit providing food, shelter, and other services to people in need, in San Clemente, Calif., in February 2020. (Google Maps/Screenshot via The Epoch Times)
Southern California OC News

After meeting for nearly six hours, the council voted 3–2 to allow Family Assistance Ministries (FAM) to remain at 1030 Calle Negocio through spring 2024. The faith-based charity provides aid to people who are homeless, on the brink of becoming homeless, and to families that are struggling financially. Mayor Gene James and Councilmember Kathy Ward voted against the extension.

In a June 13 letter to the council, FAM’s CEO Elizabeth Andrade said the nonprofit would relocate its operations by April 2024, one year later than the original contract is set to expire. Andrade’s letter also addressed concerns about whether its operations in San Clemente are a net positive for the city.

Andrade said that FAM faced additional financial strain because of the COVID-19 pandemic.

“The past two years of the COVID-19 crisis response has stretched FAM to its limits,” the letter said. “When everyone else went home … to work [during the pandemic], FAM stayed open. We provided food for the poor, we kept families in their homes with rental assistance, we provided diapers to seniors for their dignity, and we provided diapers to infants of struggling parents,” she wrote.

In a social media post before the meeting, FAM stated a forced relocation in the next 18 months would pose a “catastrophic” disruption to its ability to provide services.

In the letter, Andrade said rental assistance, cash aid, and in-kind contributions from the city amounted to $82,000 in the just-finished fiscal year. FAM also received $131,000 from Laguna Niguel and $68,000 from Lake Forest in the same period, she said.

Andrade’s letter addressed concerns about whether San Clemente is paying an unfair share to support FAM compared to benefits received, whether the charity aggravates or alleviates homelessness in the city, and whether its transitional housing is beneficial.

The city “disproportionately benefits” from the charity’s services, according to the letter. Andrade wrote that the city’s aid comprises only 1 percent of FAM’s cash funding but city residents receive 61 percent of the services and aid the nonprofit provides, as well as “in kind” support such as food and clothing donations.

According to a CapinCrouse audit conducted in 2020, FAM listed more than $3.4 million in assets. Of that, nearly $1 million came in cash and cash equivalents. The nonprofit’s administrative center is in San Clemente, and it operates satellite offices in Laguna Niguel, Dana Point, and San Juan Capistrano.

Andrade also responded to those who contend their presence attracts vagrants from other cities, saying the organization coordinates with city outreach efforts to help individuals and families connect with needed resources.

As for the efficacy of temporary housing, she said FAM has helped nearly 740 women and children relocate from the streets in the last 5 years and housed more than 960 women and children since its inception at Gilchrist House, a transitional shelter located on the property.

Officials have expressed a desire to potentially sell the property and anticipate meeting with FAM’s team at a later date to discuss the nonprofit’s future in the city over the next 5 to 10 years.

This year’s point-in-time count estimated that more than 5,000 homeless individuals live in Orange County. In the letter, FAM officials estimated that only 2 percent of those they helped remain in San Clemente after being housed.

FAM is not the only homeless charity facing challenges while renting its building from its host city. Just last month, Mary’s Kitchen—a homeless soup kitchen in Orange—was forced to vacate its base of operations after the city terminated its lease early amid concerns about increased criminal activity from some homeless individuals it served.

Unlike FAM, however, the kitchen was forced to shutter its doors on June 30, halfway through its lease agreement.