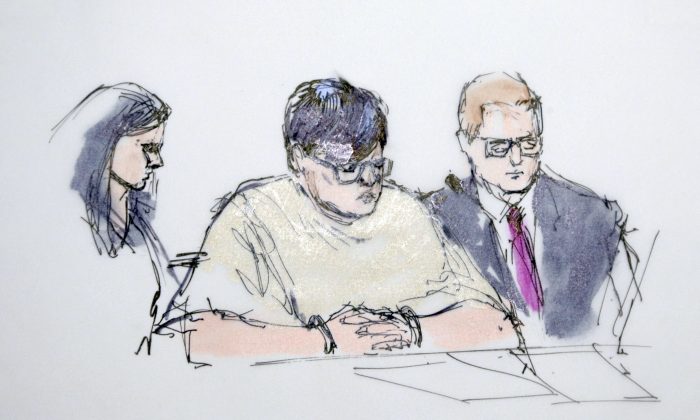 In this artist's sketch, Enrique Marquez, center, appears in federal court in Riverside, Calif., Thursday, Dec. 17, 2015. Marquez, 24, was charged Thursday with conspiring to provide material support to terrorists for plotting with gunman Syed Rizwan Farook to launch attacks in 2011 and 2012 at a community college and congested freeway at rush hour that they never carried out. (AP Photo/Bill Robles)
US

San Bernardino terrorist Syed Rizwan Farook and his neighbor Enrique Marquez planned a terror attack years ago that would likely have left dozens dead and others wounded if carried out successfully.

Farook and his wife attacked a holiday party in California earlier this month, killing 14 people and wounding 21 others.

Marquez has become the focus of authorities after they discovered he bought the two assault rifles used in the terror attack.

Federal officials said in an affidavit that Marquez told them he and Farook had carefully planned another attack back in 2011.

They also plotted out an attack on the 91 Freeway that involved stopping traffic by throwing pipe bombs during rush hour traffic.

After the traffic stopped, Farook planned to walk among the vehicle and kill survivors while Marquez watched from a nearby hill and then took out police and other emergency responders.

Students at Riverside were shocked to hear their college was a possible target.

“It is kind of shocking to think we are sitting here right now and they planned to do something so horrific here,” student Victor Garcia, 24, told the LA Times. “That is crazy, but it is a reality nowadays. What makes a person think like that?”

Alissa Estipona, 22, who spends the majority of her time on campus at the library and cafeteria, added to the Press Enterprise: “It makes me feel paranoid, and kind of scared.”

The chancellor of the Riverside Community College District, Michael L. Burke, said in a statement that the school is safe.

“The FBI, through an extensive investigation, has confirmed that no credible threat exists to any college or educational center” in the community college district, Burke said.

The new information came to light as it was also revealed that Marquez wondered less than a month before the San Bernardino attack when the multiple lives he was leading would come crashing down.

“Involved in terrorist plots, drugs, anti-social behavior, marriage, might go to prison for fraud, etc,” Enrique Marquez Jr. told someone in a Nov. 5 chat on Facebook.

Marquez, 24, was charged with conspiring to provide material support to terrorists in the deadly plots detailed above.

The pair had both become devout Muslims and spent most of their time reading about the religion or watching jihadist videos online.

In his initial court appearance, Marquez looked disheveled. His short hair flopped over his forehead, there was stubble on his face, and the pockets of his black pants were turned out. He appeared calm and showed no emotion as he gave one-word answers to the judge.

A lengthy affidavit by FBI special agent Joel Anderson outlines evidence against Marquez, including statements he gave investigators over 11 days after he waived his rights to remain silent and be represented by a lawyer.

The affidavit said Marquez called 911 hours after the attack to say his neighbor had used his gun in the shooting, using an expletive to describe Farook. Marquez then showed up agitated at a hospital emergency room, saying he had downed nine beers and was “involved” in the shooting. He was involuntarily committed to a psychiatric ward.