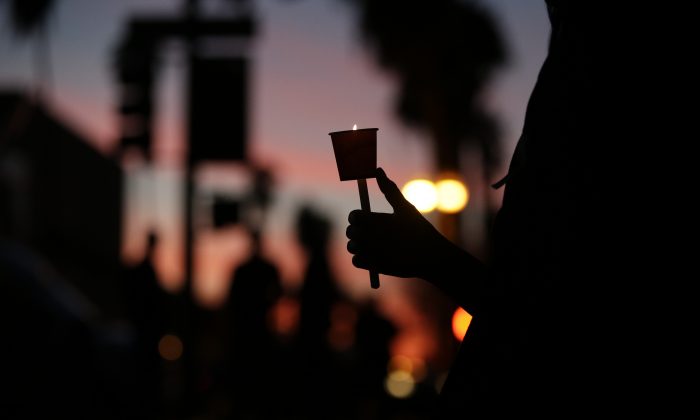 Cathleen Garcia holds a candle during a vigil to honor shooting victims on Monday, Dec. 7, 2015, in San Bernardino, Calif. The husband and wife who opened fire on a social services center last week had been radicalized "for quite some time" and had taken target practice at area gun ranges, in one instance just days before the attack that left 14 people dead, the FBI said Monday. (AP Photo/Jae C. Hong)
US

The terrorists who killed 14 people in San Bernardino, California recently received a $28,500 deposit just weeks before the attack, according to a source close to the investigation.

The anonymous source told Fox News that the deposit was made into Syed Rizwan Farook’s bank account from the website WebBank.com around November 18, about two weeks before Farook and his wife Tashfeen Malik carried out the attack.

Farook earned $53,000 a year as an environmental health inspector.

The attack took place at a holiday party for county health employees.

Investigators are exploring whether the transaction was a loan taken out by Farook, with another possibility being that the money was used to reimburse Enrique Marquez, the man who bought the two AR-15 rifles used in the shootings.

A few days after receiving the deposit, Farook converted $10,000 to cash, the source said, and withdrew the money at a Union Bank branch in San Bernardino.

In the days before the shooting, there were at least three transfers of $5,000 that appear to be from Farook’s account to that of his mother Rafia Farook.

She and Farook’s father are both under investigation for possible ties to the attack. Rafia lived in the same home as Farook, Malik, and their 6-month-old child.

The money provides further evidence that the attack was planned well in advance, the source said.

Officials now believe that the couple was radicalized for a significant period of time, although the exact details of how they became extremists are not yet fully clear.