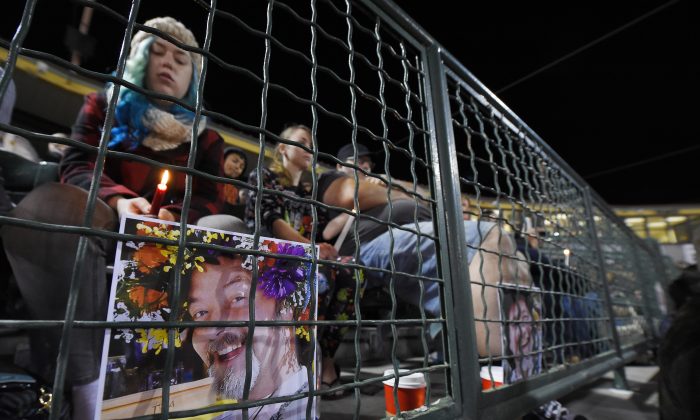 A photograph of Larry Kaufman, 42, who was killed, is displayed during a candlelight vigil at San Manuel Stadium, Thursday, Dec. 3, 2015, in San Bernardino, Calif for multiple victims of a shooting that took place at a holiday banquet on Wednesday. A heavily armed man and woman opened fire killing multiple people and seriously wounding others in a precision assault, authorities said. Hours later, they died in a shootout with police. (AP Photo/Mark J. Terrill)
US

Tashfeen Malik, the female shooter in the California massacre, was allowed to stay in America following a background check by the FBI and the Department of Homeland Security.

The 27-year-old Pakistani national, about whom many details are still sketchy, met Syed Farook, the other killer, over the Internet before he went to visit her in Saudi Arabia.

On the visit, during which authorities believe Farook was radicalized by terrorists, Farook and Malik apparently got married in Mecca, the Muslim holy city in the country, reported the Los Angeles Times.

When Farook, an American citizen whose parents immigrated from Pakistan, returned to the U.S., he brought Malik with him on a fiancee visa.

After a background check by the FBI and the Department of Homeland Security, she was granted a conditional green card.

According to the government, the processing time for such visas typically take about eight months, but immigration lawyers told the Washington Post that they can take up to 12 months or even longer.

The U.S. resident must promise to marry the fiancee within 90 days of him or her arriving in the country, or the fiance must leave or be deported. The person trying to get a visa cannot move onto a new partner–experts say people sometimes try to do that and are deported.

The process includes a lot of paperwork, and proof that the U.S. resident met his or her fiancee at least once in person.

The background check includes a review of the criminal databases in the fiancee’s country of origin, any place they’ve lived since, and the United States. It includes any type of contact with law enforcement agencies, even arrests that did not lead to convictions.

After the checks are done, the fiancee is called into an in-person interview with U.S. embassy staff in their country.

@foxandfriends why does Fox have Tashfeen Malik’s face blacked out? #SanBernadinoShooting pic.twitter.com/qveSKpxjAs

No Photos of Malik

But few know much about her and a picture of her has still not emerged days after the attack that left 14 dead and 21 wounded.

Nizaam Ali, who worshipped with Farook at a San Bernardino mosque, said he had met Malik several times but she always wore a head scarf that obscured her face.

“If you asked me how she looked, I couldn’t tell you,” Ali said.

The rarity of a female mass murderer has officials perplexed and trying to figure out the timeline of events that led to the attack.

Sen. Dianne Feinstein (D-Calif.), who had a classified FBI briefing on the shooting Thursday, noted that leaving an infant for what was essentially a suicide mission was “not something a woman would easily do.”

“So it’s going to be very interesting for me to see what her background was, what level of animus she had, because she had to have a considerable level,” Feinstein said.