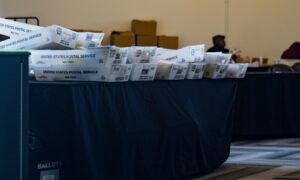 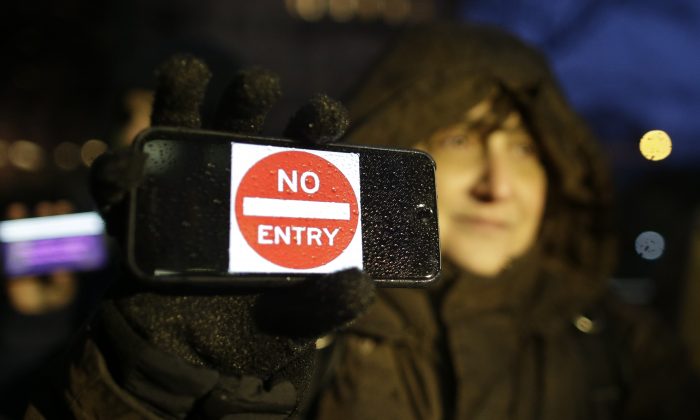 A demonstrator stands outside the Apple store on Fifth Avenue, Tuesday, Feb. 23, 2016, in New York. (AP Photo/Julie Jacobson)
US

WASHINGTON—A schism is emerging among family members of victims and survivors of the December’s shootings in San Bernardino, California, with at least one couple supporting Apple Inc. in its battle against a federal court order to help the FBI hack into a shooter’s locked iPhone.

Kondoker said he was writing to the court because he believes “privacy is important and Apple should stay firm in their decision.”

Apple asked Pym in a filing last week to vacate her order requiring it to assist investigators by creating specialized software that would let the FBI bypass security protocols to test random passcode combinations in rapid sequence. The filing accused the federal government of seeking “dangerous power” through the courts and of trampling on the company’s constitutional rights.

Kondoker called for stronger gun laws, saying “it was guns that killed innocent people, not technology.” He said he believed the FBI had access to information it has ignored, writing, “I’m very disappointed in the way they’ve handled this investigation.”

A spokesman for the FBI declined to comment. A spokeswoman for the Justice Department did not immediately provide comment. Apple said in a statement it “has the deepest sympathies for the victims and their families.”

The letter, which Kondoker requested be included as part of the court file, gives support to Apple’s case one day before a congressional hearing that will include testimony from FBI Director James Comey and Apple General Counsel Bruce Sewell.

Filings in support of either side of the case are due by Thursday. A person close to the filings in support of Apple said more than 25 companies and organizations have pledged their support, including Facebook, Google, Microsoft, Twitter, Yahoo and Verizon. The person wasn’t authorized to discuss the legal process publicly and spoke on condition of anonymity.

Los Angeles attorney Stephen Larson is representing at least several families of victims and others affected by the attack and said he plans to file a brief in support of the Justice Department by March 3.

The county-issued iPhone 5C was used by Syed Farook, who, with his wife, Tashfeen Malik, killed 14 people at an office holiday party in December. Farook and Malik died later in a gun battle with police. The government said they had been at least partly inspired by the Islamic State and said it was critical that its investigators conduct a thorough investigation by accessing the phone.

The couple physically destroyed two personal phones so completely that the FBI has been unable to recover information from them.

Kondoker, who works in information technology, said he has attended FBI briefings and has been frustrated by the lack of information in the case since the attacks. He said he initially worried that Apple’s opposition to the court order would be another roadblock, but added: “I have come to understand their fight is for something much bigger than one phone. They are worried that this software the government wants them to use will be used against millions of other innocent people. I share their fear.”

His wife of 17 years, Anies, worked with Farook at the county health department and was shot three times in a hallway as she returned from a restroom. The handbag she left on a chair was “shattered by bullets,” and Kondoker wrote, “There isn’t a day that goes by I don’t think about what could have happened had she actually been sitting in that chair.”

She survived the attack and is recovering. Kondoker, who couldn’t be immediately reached for comment by phone, said he, his wife and their three children are a Muslim family who are proud to call America home. He called the attack “an act of hate.”

Kondoker said his wife had a county-issue iPhone and never used it for personal business, and he believed it unlikely there was anything valuable on Farook’s phone.

“Neither I, nor my wife, want to raise our children in a world where privacy is the tradeoff for security,” Kondokersaid. “I believe this case will have a huge impact all over the world. You will have agencies coming from all over the world to get access to the software the FBI is asking Apple for. It will be abused all over to spy on innocent people.”