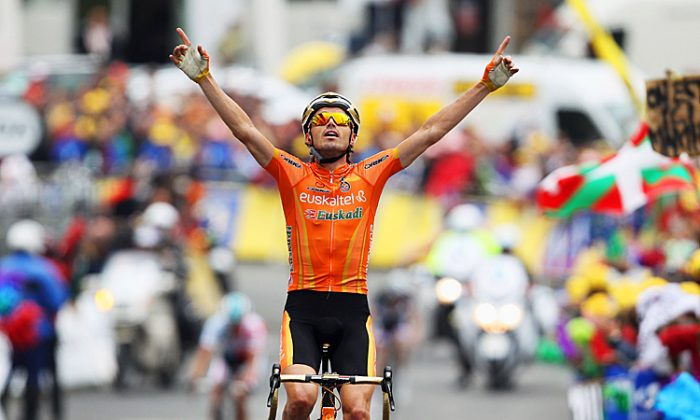 Euskatel’s Sammy Sanchez joined an attack on the slopes of the final Cat 1 climb of Stage Three of the Vuelta al País Vasco and outraced RadioShack’s Chris Horner and Katusha’s Joaquin Rodriguez to win the stage and the leader’s jersey.

Sanchez bridged across to Horner and Rodriguez with four kilometers left on the ascent up Alto de Ustartza, a brutal 3.5-km climb with an average grade of nearly ten percent. Sanchez, who had won this stage in 2010 and 2011, kicked in the final few hundred meters to repeat for a third time.

“I am very happy. For me, this is something special,” Sanchez told velonation.com.

The Basque Tour is Euskatel-Euskadi’s home race, and to win here three years running must have made it all the more special.

The day dawned unseasonably cool and overcast, but the rain held off for Stage Three, 164 km from Vitoria-Gasteiz to Arrate. With seven climbs, including two Cat 1s and four Cat 2s, this was the toughest stage of the race.

After 25 km, the escapees started attacking each other, and the gap to the peloton started shrinking. Finally Herrada and Christensen got away from the other three by almost half a minute. By the third climb of the day, the Cat 2 Alto de Karabieta (6.3 kilometers at an average gradient of 7.69%) the pair had nearly three minutes on the pursuing trio.

Veikkanen fought hard over the next 20 km to finally catch the leaders, who now had a gap of 1:40 over Piedra and Mucelli, and 3:45 on the peloton.

The leaders hit the Cat 1 Alto de Ixua (4.8 km at an average gradient of 8.44%) 38 km from the finish; Christensen couldn’t keep the pace and faded. Herrada upped the pace and dropped Veikkanen a kilometer later.

Halfway through the climb two Katusha riders, Angel Vicioso and Giampaolo Caruso, decided to catch the Movistar rider. This pair labored for 20 km to finally catch Herrada; by the time they reached him, their lead over the peloton was down to 35 seconds.

Vicioso and Caruso pushed hard on the fist slopes of the Alto de Ustartza, dropping Herrada seven km from the finish, but it was wasted effort; the peloton took full advantage of the flat section between the final two climbs and caught the pair with 5.7 km to go.

Liquigas and Lotto led the peloton up the final climb. Five km from the end, RadioShack-Nissan’s Chris Horner attacked, followed at once by Astana’s Robert Kiserlovski. This attack was soon caught and was followed immediately by another by Katusha’s Joaquin Rodriguez, with Horner joining. Sammy Sanchez waited a kilometer then launched his own attack, while behind him a chase group of seven riders formed.

The lead trio cooperated, switching off in front and holding their advantage around ten seconds until the final kilometer, when the road flattened out. The trio raced together until the final few hundred meters when Sanchez proved he had the most left in his legs.

Sanchez takes the overall lead with his win, but has no time over Chris Horner or Joaquin Rodriguez, and only 12 seconds over a whole host of fast riders. Stage Four, another climbing stage with a mountaintop finish, could see Sanchez increase his lead or lose it to any one of a number of riders, including Horner, Rodriguez, or Ryder Hesjedal. With Stage Five likely ending in a bunch sprint (or as an outside possibility, a breakaway by non-contenders) that leaves everything for the Stage Six time trial which should favor Horner and Hesjedal.