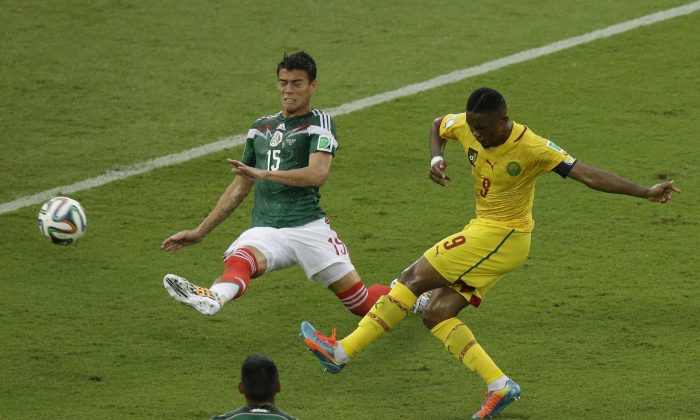 Cameroon lost its opening match on Friday to Mexico, 0-1.

“He has a problem with the right knee that he already had at the end of the season with his club Chelsea,” Finke told a press conference, according to FIFA.

“He did not train yesterday nor today.”

Cameroon’s next match is on Wednesday in Manaus, and they need a victory to maintain hopes of qualifying for the Round of 16.

Their third match will be on June 23 in Brazil.

Eto’o, a legendary player in Cameroon, is considered by some to be the best player on Cameroon’s team. However, he has rankled many in the nation with his behavior, including some of his teammates.

If Eto’o does miss the Croatia match, Finke will likely put in Vincent Aboubakar in his place, according to Bleacher Report.

See a recap of the Mexico-Cameroon game via the Associated Press below.

NATAL, Brazil—Oribe Peralta scored in the second half to help Mexico to a 1-0 victory over Cameroon in torrential rain Friday, earning El Tri their first World Cup win over an African team and giving them a crucial three points in Group A.

Giovanni Dos Santos had two goals disallowed in a frustrating first half, when Samuel Eto’o hit the post for Cameroon.

Peralta broke the deadlock just as thousands of Mexican fans were cheering for Hernandez to come into the game. He swooped after Cameroon goalkeeper Charles Itandje parried a shot by Dos Santos.