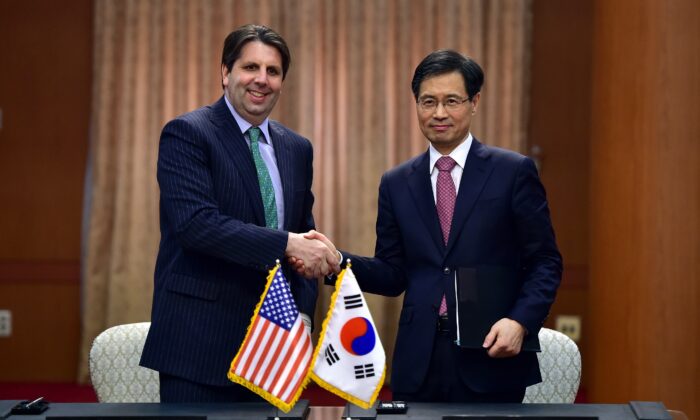 Former U.S. Ambassador to South Korea, Mark Lippert, is expected to join Samsung Electronics next month as head of corporate and government affairs in North America.

Industry experts told The Korea Herald they believe the recruitment will allow Samsung to bolster its responsiveness to changing U.S. policies, especially those regarding chips, which have emerged as a key strategic item amid global supply chain risks.

Lippert is expected to start work for the tech giant in March as the executive vice president of Samsung Electronics America and oversee its external relations in the region. He is reportedly in the final stages of signing the contract.

South Korean public opinion believes that Lippert will play a role in assisting Samsung and the Biden administration create a U.S.-centric semiconductor supply chain and strengthen the U.S.-South Korea technology alliance, according to Korea Economic Daily.

In November last year, Samsung announced it would invest $17 billion to build new foundry chip production lines in Taylor, Texas, marking its largest investment to date in the United States.

The chipmaker said it is targeting the second half of 2024 to have the advanced semiconductor fab operational.

According to the Korea Economic Daily, major South Korean companies base their moves on Washington policy. Companies’ global investment, sales, and merger and acquisition (M&A) strategies may change according to the policy trends coming out of the White House and the U.S. Department of Commerce.

In 2020, the Trump administration blocked the Dutch semiconductor manufacturing equipment provider ASML from selling its EUV (extreme ultraviolet) lithography systems—devices essential to making advanced microchips—to China. The efforts were carried over by the Biden administration, continuing the stance of the Trump White House, The Wall Street Journal reported.

According to a Reuters report, SoftBank’s cash-and-stock deal with Nvidia was announced in 2020, but the U.S. Federal Trade Commission sued to block it in December, arguing that competition in the nascent markets for chips in self-driving cars and a new category of networking chips could be hurt.

The collapse of this sale marks a major setback for the Japanese conglomerate’s efforts to generate funds at a time when valuations across its portfolio are under pressure.

“Having a handle on the U.S. government’s policy stance has become more important than ever, particularly in the Biden administration,” said an industry official, according to the Korea Economic Daily.

According to the Daily, major South Korean companies with offices in Washington have expressed difficulty in understanding the policy orientation of the Biden administration, saying that every step is like “walking on thin ice,” hence the need for Korean companies to look at hiring former diplomats.

The Biden administration has lured in major foreign investment through government subsidies and tax incentives, but on the other hand, has become increasingly explicit in demanding business information, even industrial secrets, from foreign firms operating in the country, the report added.

In efforts to exclude China from the semiconductor supply chain and build a secure domestic supply chain, the U.S. government last year required global semiconductor companies such as Samsung Electronics and S.K. Hynix to submit their sensitive semiconductor business information, according to Hankyoreh, a South Korean newspaper.

Lippert served as the U.S. ambassador to South Korea from 2014 to 2017 under former U.S. President Barack Obama. He built a reputation of integrating with Korean culture during his ambassadorship.

Following his tour, he worked as the vice president of Boeing International and as a senior adviser for the Center for Strategic and International Studies (CSIS), a U.S. think tank. More recently, he assumed the role of YouTube’s Asia Pacific public policy chief in June 2020.