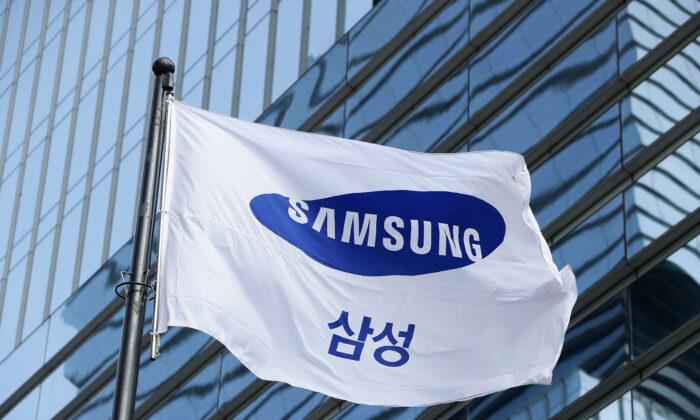 A Samsung flag flies outside the company's headquarters in Seoul, South Korea, on Jan. 12, 2017. (Chung Sung-Jun/Getty Images)
By Naveen Athrappully

Samsung announced on Wednesday that it has chosen Taylor, Texas, for its $17 billion advanced chip-manufacturing plant, which is expected to create 2,000 direct high-tech jobs.

Construction is expected to begin in the first half of 2022, and production in 2024, with at least 6,500 positions for construction-related employment.

The project will be Samsung’s largest investment in the country, and the largest direct foreign investment on record in Texas.

The largest foreign direct investment in the state of Texas EVER. pic.twitter.com/a7VhbK3B9Q

The advanced Samsung Electronics Co. Ltd. factory will cover more than 5 million square meters. Taylor was selected because of its proximity to Samsung’s existing facilities in Austin as well as the city’s accommodating infrastructure and local semiconductor ecosystem.

Besides the 2,000 jobs, the plant will support thousands of related indirect employment as well. A grant of $27 million has been awarded to Samsung by the Texas Enterprise Fund to support its creating of local jobs.

“Samsung’s new semiconductor manufacturing facility in Taylor will bring countless opportunities for hardworking Central Texans and their families, and will play a major role in our state’s continued exceptionalism in the semiconductor industry,” Abbott said.

With this plant, Samsung will have invested a total of $35 billion in Texas since 1996, and $47 billion in the United States.

The three biggest global chip manufacturers are Intel, Samsung, and Taiwan Semiconductor Manufacturing Co. (TSMC), which leads the pack. Along with Samsung, Intel and TSMC are investing heavily in global production facilities to meet a post-pandemic surge in demand that has stretched global capacity to the max. Chips are essential in everything, from computers and home devices to automobiles, with the current shortages expected to last for a while.

“With greater manufacturing capacity, we will be able to better serve the needs of our customers and contribute to the stability of the global semiconductor supply chain,” Kinam Kim, vice chairman and CEO, Samsung Electronics Device Solutions Division, said in a statement.

As an incentive for choosing Taylor, 90 percent of property tax will be waived for a decade and 85 percent will be discounted for the next 10 years by the local government. Samsung’s investment is expected to receive further tax cuts as the plant is located in a federal opportunity zone.

Given the business move, Taylor and Texas are now at the forefront of an industry with increasing geopolitical importance. “The implications of this facility extend far beyond the boundaries of Texas,” Abbott said at a press conference. “It’s going to impact the entire world.”

Manufacturing, in the past, has always gravitated towards Asia for low-cost economical advantages. But the recent chip shortages have exposed global supply chain vulnerabilities and the need for diversification. Supply chain interruptions have resulted in critical security problems, billions lost in revenue for global manufacturers, and forced plants to furlough workers.

The White House has also called for the CHIPS Act, a $52 billion bill to be passed without delay in the House of Representatives. The CHIPS Act focuses on funding for semiconductor research and manufacturing in the United States.

“Increasing domestic production of semiconductor chips is critical for our national and economic security,” U.S. Commerce Secretary Gina Raimondo said in a statement on Tuesday.

Samsung’s statement follows an announcement from Texas Instruments, which said that the company plans to invest $30 billion in Sherman, Texas, for a semiconductor wafer fabrication chip plant, creating 3,000 new jobs.

Besides this, GlobalFoundries, a multinational semiconductor contract manufacturer, is increasing investments in upstate New York, while TSMC is planning on investing about $100 billion over three years to upgrade its global manufacturing capabilities, including $12 billion in Arizona.

Analysts predict that Samsung will make cutting-edge chips of 5-nanometres or less in the new plant, in addition to its advanced logic chips. The chips will be manufactured for clients like Qualcomm, and will be capable of handling more data per area than the 14- and 28-nanometer ones currently made in Austin.

At present, Samsung has more than 20,000 employees across the United States.