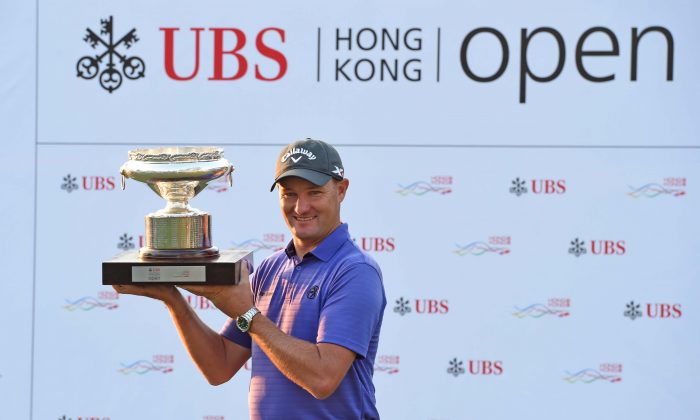 HONG KONG—Sam Brazel of Australia won the UBS Hong Kong Open on Sunday Dec 11, producing a superb birdie on the last hole to clinch the title.

Rafa Cabrera Bello of Spain, was at the top of the leaderboard on days 1 and 2 and was joint leader with Brazel at -11 at the beginning of the final round.

Cabrera Bello moved ahead to -12 on the par 5, 3rd but bogeyed the 7th and double bogeyed the 8th to drop down the leaderboard to -9. Bazel also dropped shots on the 1st nine, bogeying the 6th and 9th holes.

Fortunes changed for both players on the back 9. Cabrera Bello birdied the 10th but had to wait until the 16th and 17th for his next birdies, while Brazel pushed ahead to -12 with successive birdies on the 11th, 12th and 13th. Two different paths but they were back in the lead and tied at -12 standing on the 18th tee.

In the final round the pin on the 18th green was placed in its normal final day position, to the right hand side of the 18th green. This forces players to play their tee shots to the left of the fairway close to the tree line to get a clear shot to the pin. Many players hit trees from the tee or had their 2nd shots blocked.

Both Cabrera Bello and Brazel were well placed off the tee at the final hole and had clear shots to the pin from the top of the hill. Brazel played a good shot for his 2nd to stop just 6 or 7ft from the pin, while Cabrera Bello although hitting the green, left himself a long putt from the centre of the green.

Cabrera Bello downed in 2 to par the hole while Brazel confidently holed his putt for a birdie to win the tournament.

This was the first win of the season on the Asia Tour for 37 year’s old Brazel, pocketing just over US$333,000 prizemoney for his 4 days of play and is now qualified to play on the European Tour in the coming season.

With no scoring stampede by the leaders, the chasing pack progressed and at one stage the top 5 on the leader board were all on -11. Andrew Dodt of Australia moved up to -12 to start his final hole carding 6 birdies, but critically, he dropped a shot on the 18th hole after his tee shot was short and in the rough by the right hand fairway bunker.

Tommy Fleetwood of England and David Lipsky of USA were on -11 standing on the 18th tee Fleetwood maintained his position with a par while Lipsky’s ball from his 2nd shot, ran down the slope into the water causing him to drop a shot to finish at -10. Dodt and Fleetwood finished tied for 3rd and Lipsky finished in standalone 5th place.

Englishman Danny Willett was leader in the Club House with 8 groups left on the course, producing 5 birdies on the final day but dropping a shot at the 17th hole to finish on 9 under par for a 6th place finish. Probably Willett’s most pleasing shot of the day was hitting the green from the fairway bunker on the 18th hole.

Paul Waring of England also had a good day taking 5 shots off his overnight score to finish in 7th place on 8 under.

The lowest round of the final day was a -6 by Spaniard Pep Angles to tie for 14th place with 10 others including David Howell (who carded plus 2 on the day), Thongchai Jaidee (+1) and Edoardo Molinari (+1).

Scott Hend finished down the order in the tournament but collected his Asian Tour Order of merit winner’s trophy at the prize giving.