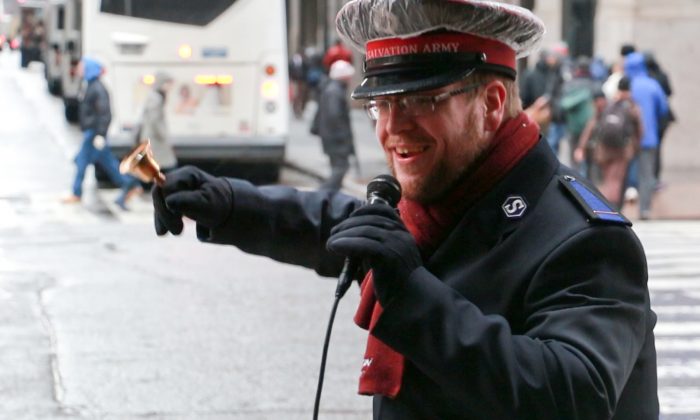 NEW YORK—As commuters rushed in and out of Penn Station, shielding themselves from the morning snow, one giant figure stood practically motionless outside the door. He wore a dark officer’s cap with a band of maroon around it, and in his hands he held a tarnished silver baritone. From deep within the horn’s recesses came a recognizable Christmas tune, quiet at first, lost in the noise of the city’s own bellowing horns. But slowly it found its voice, bringing first the attention and then the donations of people passing by.

“I only play it during the Christmas holidays,” said Walter Curtis. “The feeling I had as a child still comes through during Christmas and my way of expressing that is through song and music.”

Curtis is a Salvation Army Red Kettle attendant. He said he is proud to be a part of this uniquely American holiday tradition.

And clearly, the passersby, despite the snow, appreciated his singing and playing as much as he enjoyed doing it.

“You can stand out here all day and ring the bell. But once you start singing carols, you don’t know, it’s like people come out of the sky,” Curtis said.

Out With the Old and in With the New

Just down the street a pair of Salvation Army cadets, were drumming up their own style of holiday cheer as they danced to what sounded like a mix from a high school prom.

“New York City is a different city than everywhere else in America and we are in a digital age. Everyone has got their heads down in smartphones and iPads so you got to get their attention. What better way than having a little fun and keeping warm,” said Michael Buzzard, who dances for donations seven hours a day, five days a week. “The days of being in the city and just ringing a bell unfortunately have passed.”

Their moves definitely seemed to be working as a crowd of people holding camera-phones gathered round. Bystanders started joining in and a steady stream of donations filled their kettle.

Just up the block two young ladies, also with the Salvation Army, were showing off their moves to catchy tunes with similar success. They say no one asks them to dance, but if they don’t, they get cold and, they acknowledged, it does make a difference in people’s generosity.