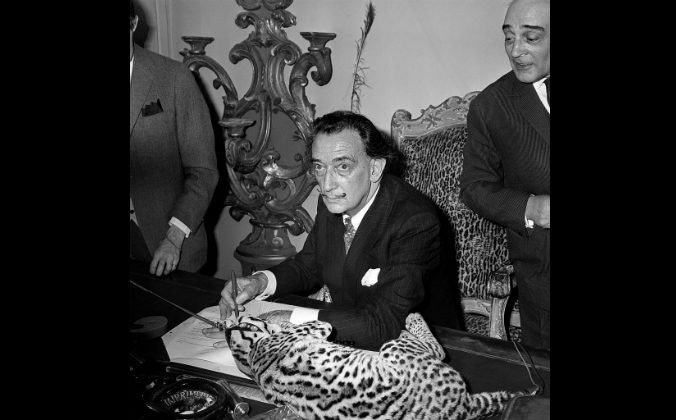 The remains of famous surrealist painter Salvador Dali were exhumed on Thursday in order to conduct a paternity DNA test.

But the results of the test might be overshadowed by another aptly surreal discovery: Dali’s distinct mustache is still intact, Fox News reported.

Forensic experts who participated in the exhumation say the painter’s whiskers are still in his signature “ten past ten” position, referring to the shape formed by the hands of a clock.

Spanish experts say they removed some of the artist’s hair, nails, and two pieces of bone in order to obtain samples of the DNA test.

The experts took extraordinary steps to prevent images of Dali’s corpse from leaking to the public. The glass dome of the museum where he was buried was covered by a special canopy to prevent drones and aircraft from capturing photos of the scene.

Meanwhile, the five experts involved in the process had to deposit their cellphones in a vault before the accessing the casket. The precautions were taken out of respect for the painter’s remains and to prevent contamination.

Dali died at the age of 84 in 1989. He was buried in the Dali Museum Theater in his hometown of Figueres in Spain. Dali’s body was exhumed to resolve longstanding claims by 61-year-old Pilar Abel, a card reader who believes her mother had an affair with Dali.

A Madrid judge ruled in June that the remains should be exhumed to resolve the claim.

Lluis Penuelas Reixach, the secretary general of the Gala Dali Foundation, said that the artist’s remains are well-preserved and mummified following an embalming process performed at the time of the burial.

Dali and his wife Gala—born Elena Ivanovna Diakonova—did not have any children of their own, although Gala had one child from a previous marriage.

If Abel’s claim proves to be true, she would have a right to part of Dali’s estate, which is now in the hands of a public foundation. If the DNA test shows that she is not Dali’s daughter, Abel will be held responsible for the costs of the exhumation.

The biological samples collected from Dali’s body will be sent to Madrid for examination.