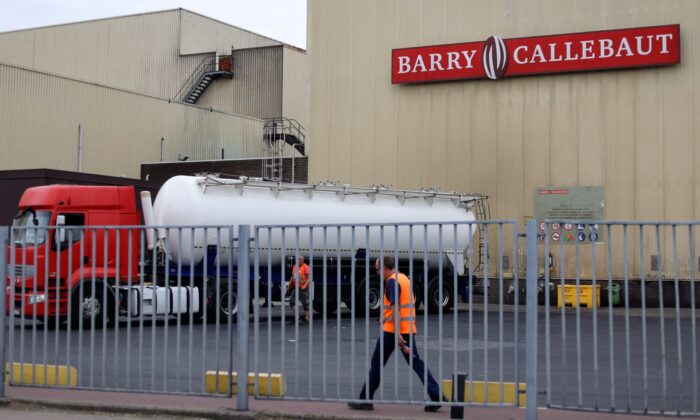 The Swiss chocolate maker Barry Callebaut has paused production at a plant in Belgium, after discovering a salmonella-positive lot, the company confirmed on June 30.

In a statement, the Zurich-based company said all products manufactured since June 25 in Wieze, a village in East Flanders, have been placed on hold. The facility, which Barry Callebaut says is the world’s largest chocolate factory, produces around 270,000 metric tons of cocoa and chocolate products annually.

It’s unclear how many, if any, products of the salmonella-affected lot have actually reached consumers, Korneel Warlop, a spokesman for Barry Callebaut, told AFP. The company noted that it’s currently working to contact customers that may have received products affected by the contamination.

The Belgian factory supplies chocolate products to brands including Nestle, Hershey, Mondelez, and Unilever; it doesn’t make chocolates to be sold directly to consumers.

Warlop told the news service that most of the products discovered to be contaminated are still on site.

Additionally, the factory has also asked customers to “block any shipped products” as a precaution.

“Barry Callebaut informed the Belgian food authorities (FAVV) about the incident and has taken the precautionary measure to stop all chocolate production lines and to block all products manufactured since the time of testing,” the company stated on its website.

Quality experts identified lecithin as the source of the contamination, the company said. Lecithin is a yellow waxy substance that is used for smoothing food textures and repelling sticking materials.

“As lecithin is used in all chocolate production, we have taken the precautionary measure to stop all production lines,” the chocolate maker said. The company continues to investigate the “root cause analysis and risk assessment.”

“Barry Callebaut will now take the time to continue with the very diligent root cause analysis—keeping the FAVV informed in the process,” it said. “When that is completed, the lines will be cleaned and disinfected before resuming the production process.”

The firm described the incident as “a very exceptional case,” explaining that it was able to quickly identify the contamination because there are nearly two dozen employees working on food safety.

“In our local site in Wieze, we train our people to recognize food safety risks,” the company said. More than 1,000 employees work at the Belgian factory, while international production reaches more than 36 countries worldwide.

The discovery at the Wieze plant comes after Ferrero Group was granted conditional authorization to restart its production lines in mid-June after Kinder products in the UK were recalled in April over an outbreak of salmonella at a Ferrero plant in Belgium.

Belgian health authorities ordered the Italian confectionery group to suspend all production at its plant in Arlon in late April, after an investigation into dozens of cases of salmonella linked to the company’s Kinder chocolates.

“After Salmonella was detected in the Arlon plant, Ferrero has taken concrete actions to ensure that a situation like this does not happen again,” the company said in a June 17 statement announcing the restart of production.

“More than 1,000 Ferrero employees and independent specialists have been working at the plant continuously,” it stated. “More than 1,800 quality tests have been completed, 10,000 parts dismantled and cleaned, and significant investments made. This includes the replacement of multiple pieces of equipment as well as the installation of 300 meters of new pipeline.”