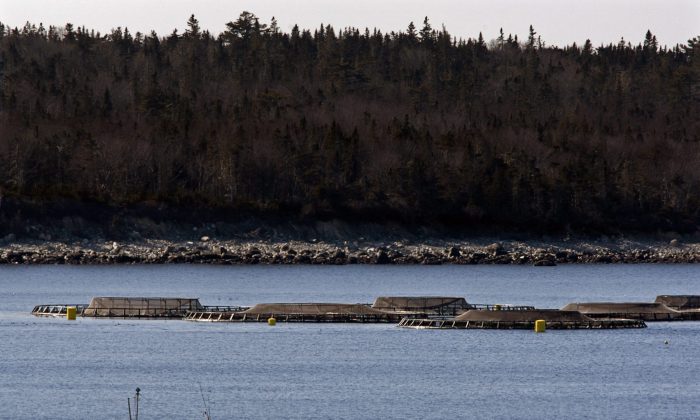 The salmon farming industry may present a front of confidence and optimism, but behind the public relations image is a reality of threat and fear.

The situation in Norway—from which the industry spread to Scotland, Chile, and Canada’s east and west coasts—shows the direction salmon farming is headed. It is not a healthy future.

In Norwegian salmon farms, viral diseases proliferate and sea lice are developing resistance to the pesticide of choice, emamectin benzoate (aka SLICE).

Damage to the native Atlantic salmon may be serious and irreversible.

With increasing frequency, sea lice-infected farmed salmon in Norway must be bathed in a hydrogen peroxide solution to cleanse them of the parasite. This is also becoming the practice in Chile, Nova Scotia, and British Columbia.

SLICE was once allowed for use in Canada only through the Emergency Drug Release program as a treatment of last resort. But since June 2009, it has been routinely applied and is now becoming ineffective.

Although escaped farmed Atlantic salmon don’t seem to be a major problem in B.C., where they are not native, in Norway and Canada’s Maritimes their damage to the native Atlantic salmon may be serious and irreversible.

The Norwegian Institute for Nature Research recently tested 20,000 Atlantic salmon in 147 Norwegian rivers. It found that, in 109 of these rivers, up to 50 percent of the wild fish and up to 42.2 percent of their genes were altered by interbreeding. This genetic contamination could impair the viability of the wild fish and that would be a serious threat to wild Atlantic salmon in Canada’s Maritimes.

In Chile, which does not have native salmon, about 20 percent of farmed fish are once again dying from an outbreak of the infectious salmon anemia (ISA) virus. The disease previously spread throughout its industry between 2007 and 2009, killing millions of salmon, costing the industry $2 billion, and shocking Chile’s economic and social structure. Heavy antibiotic use is now promoting drug resistant super-viruses.

This environmental catastrophe has sparked riots and allegations of criminal wrongdoing.

The latest disaster for Chilean salmon farms has been a toxic algal bloom. The “red tide” has poisoned about 2,000 kilometres of coast, killed uncounted tonnes of wild fish, contaminated shellfish, and been fatal to people and marine mammals.

This environmental catastrophe has sparked riots and allegations of criminal wrongdoing.

Chilean biologists implicate the salmon farming industry in the spread of the bloom because the supply of fecal nutrients beneath the many open-net pens promotes algal growth, and because more nutrients were added when about half of the estimated 100,000 tonnes of dead salmon were left to rot in the sea. An additional 150 million farmed salmon are now at risk from further algal blooms, the recurring ISA virus, and the ongoing sea-lice epidemic.

Meanwhile, in British Columbia, tonnes of farmed salmon in Clayoquot Sound and other facilities have died from toxic algal blooms and low oxygen conditions.

The list of B.C. problems is long and damning: uncontrollable sea-lice infections require hydrogen peroxide baths, piscine reovirus is now epidemic in farmed fish, HSMI (heart and skeletal muscle inflammation) has been found, the ISA virus and many other viruses threaten, First Nations are issuing eviction notices to the industry for trespass in their unceded territories, and scientists—the accumulating evidence suggests—are getting closer to linking salmon farms to the transfer of viral infections to wild salmon.

The threats to salmon farming are real and growing, and the environmental threats the industry represents are similarly bleak.