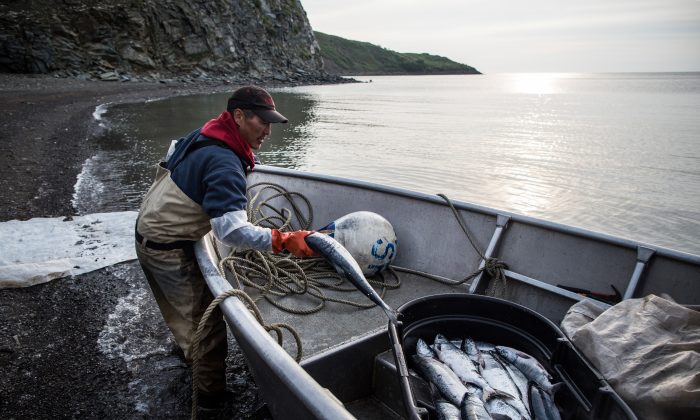 The Food and Drug Administration gave the green light on Nov. 19 for genetically engineered salmon to be sold to consumers. AquaBounty’s application to sell its quick-growing salmon was finally approved 20 years after initially being filed.

“The FDA has thoroughly analyzed and evaluated the data and information submitted … regarding AquAdvantage Salmon and determined that they have met the regulatory requirements for approval, including that food from the fish is safe to eat,” Bernadette Dunham, director of the FDA’s Center for Veterinary Medicine, said in a statement.

The FDA stated that AquaBounty’s salmon was found to be as nutritious as regular, nongenetically modified Atlantic salmon, and that the agency found no “biologically relevant differences” between the two.

AquaBounty combines growth hormone genes from Pacific salmon with DNA from the anti-freeze genes of an eel-like ocean pout to create a fish that produces growth hormones year round and thus grows faster than natural varieties. The AquAdvantage Salmon still reaches the same size when mature.

Despite obvious discomfort with the idea, it’s likely many consumers who are against the practice may end up buying it anyway.

Currently, labeling of GMO products is voluntary, and the CEO of AquaBounty told the Washington Post that the company will most likely label the genetically modified fish as regular “Atlantic salmon” because selling the only GMO fish on the market would be a “dangerous” marketing decision.

Meanwhile, Congress is working on legislation that will pre-emptively stop individual states from requiring food suppliers to label GMO products, with the stated purpose of preventing the creation of a patchwork of state regulations that could disrupt the food supply and raise prices.

The Safe and Accurate Food Labeling Act was passed in the House with bipartisan support in July, and expects to enjoy a similar level of support in the Senate.

The bill has been dubbed the DARK Act, or Deny Americans the Right to Know, by its critics.

President Obama has been reticent about the issue, although on the campaign trail in 2007 he said that every American should have to right to know if their food is genetically modified.

The FDA’s approval of genetically modified salmon was roundly denounced by anti-GMO activists.

The main concern is that GMO salmon could escape into the wild and threaten existing salmon populations.

AquaBounty maintains that no such risk exists because all its fish are female and sterile, and physically stored in facilities on land. But Friends of the Earth, an environmental organization that’s been campaigning against what it calls “Frankenfish,” said that once the salmon is approved, it becomes much easier to change farming practices down the road.

Friends of the Earth said that more than 60 grocery chains in the country have promised not to carry GMO salmon, including Safeway, Target, Trader Joe’s, and Whole Foods. In August, Costco made headlines when it refused to sign the pledge.

The organization warns that FDA approval of the salmon will set a precedent for the 35 other species of genetically modified fish in development, as well as similarly modified chickens, pigs, and cows.