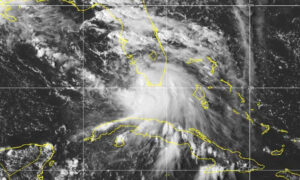 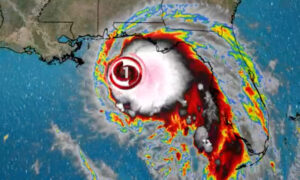 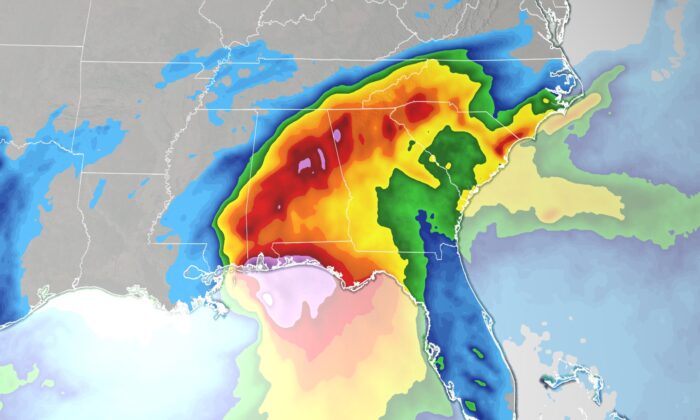 Hurricanes are commonly thought of as strong, powerful winds. But it’s actually the water that causes most of the destruction, accounting for nearly 90 percent of fatalities.

Ten to 20 inches of rain are expected along the Gulf Coast, with isolated higher totals of 30 inches possible from western Florida to the southeastern Mississippi coast.

Atlanta, Birmingham, Charlotte, and even Greenville, South Carolina, all at least 200 miles from the coast, will see significant amounts of rain that could trigger flooding.

Months’ worth of rain in just a few days

Sally is moving at only 2 mph as of the 11 a.m. ET update from the National Hurricane Center. That is slower than most humans walk—and that is a big problem.

On average, most humans walk about 3 to 4 mph. When a storm comes to a crawl this close to land, as we’re seeing with Sally, it allows the storm to send copious amounts of rain on shore for days.

“An average September sees around 4–5 inches of rainfall along the Gulf Coast in MS/AL/Florida panhandle—Sally will drop this amount in a couple of hours and likely produce several months’ worth across some areas before the storm leaves the region,” explains Brandon Miller, CNN meteorologist.

Models have shifted to the east in the past 24 hours, and that means the heaviest rain has also shifted farther east, putting a place like Dauphin Island, Alabama, with a forecast of up to 20 inches of rain (isolated amounts up to 2 feet).

What is storm surge?

As mentioned earlier, 90 percent of the fatalities in a tropical system are due to water, and half of those are due to storm surge.

Storm surge is the rise in sea level during a big storm. It is measured as the height of the water above what the normal predicted astronomical tide height would be.

It’s not always cities on the coast that are impacted by storm surge; inland locations can also have storm surge. New Orleans, for example, is not on the coast, but it will be more indirectly impacted via Lake Pontchartrain, which is expected to surge 2-4 feet.

Since New Orleans and Lake Pontchartrain are currently west of Sally’s estimated landfall, storm surge here will be lower than other areas east such as, Dauphin Island and Gulf Shores, Alabama, which can expect a 4–7 feet surge, or Pensacola and Destin, Florida, a 3–5 feet surge.

So, if New Orleans is on the western side of the storm, where surge is lower, why all the attention on this city? The answer is that this city is shaped like no other big city in America.

New Orleans is especially at risk for flooding because it is essentially shaped like a bowl. Thanks to the drainage system they have set up, the city can act like a colander allowing water to flow out, but when it rains a lot in a short period of time, the drainage system can become overwhelmed, and that colander acts more like a bowl and floods the city. Thankfully, New Orleans being west of the current estimated landfall, they are only expected to see up to 1–2 inches of rain, but if the track shifts, that could change.