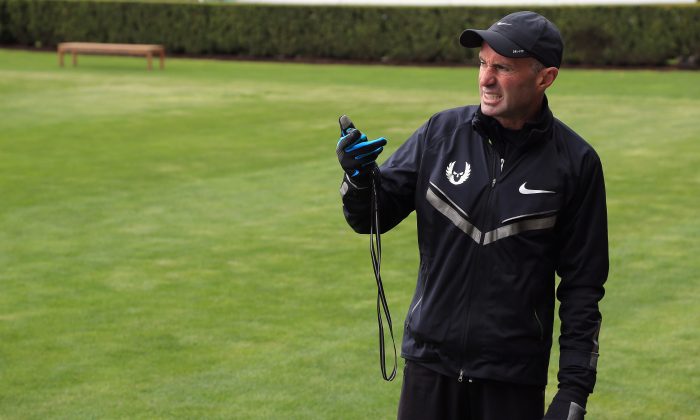 Coach Alberto Salazar of the Nike Oregon Project times athletes as they train on the grass at the Nike campus on April 13, 2013 in Beaverton, Oregon. (Doug Pensinger/Getty Images)
Sports

Ever have the feeling you’ve seen the movie before?

This one features a hero of American sport, backed by the financial might of Nike, leading a team of underdog athletes – many Americans, but not all – into the toughest international competition imaginable. They come home with superlative results.

What follows is the nasty part: allegations of performance-enhancing drug use, fierce denials and the potential for both lengthy, official investigations and a crushing scandal.

The story of Lance Armstrong and the US Postal Service team? Guess again. This one’s Alberto Salazar and the Nike Oregon Project.

While the Salazar case has not garnered even remotely the kind of attention Armstrong’s did, at least in the United States, there have been some similarities that are useful to note in the wake of accusations against Salazar and his running program that broke June 3 with reports from ProPublica and the BBC.

Getting beyond the obvious did-they-or-didn’t-they aspect of any attempt to catch drug cheats, both cases tell us something about how we can expect drug cases to evolve in the future, and about the important role of tough, skeptical journalism in policing sports.

But first, a quick summary of the developments for those who don’t know the players or don’t pay much attention to track and field, which unfortunately for running enthusiasts – myself included – is most of America, including the sports media.

The central figure in the story, Salazar, is a famed American distance runner, winner of both the Boston and New York City marathons in the 1980s. He became a coach after his running career, once pacing Armstrong through the first 10 miles of the marathon in New York. The cyclist, who had seven Tour de France titles stripped from him for doping, also turned to Salazar for guidance in 2011 when he was aiming to build a triathlon career.

According to the Oregon Project website, Salazar was disgusted after seeing Americans excited about a sixth-place finish at Boston in 2001 and “set out to change this mindset and get American distance running back on top, where it belonged.”

The greatest success of the Portland, Oregon-based, Nike-sponsored project has been the 10,000-meter event at the London Olympics, where two Salazar-trained athletes took gold and silver: Great Britain’s Mo Farrah, followed by the coach’s star American pupil, Galen Rupp.

Early this month, the BBC, led by Panorama reporter Mark Daly, and David Epstein of ProPublica, partnered on stories that accused Salazar of engaging for years in an array of unethical and banned practices, such as pushing athletes to use prescription medications that were unneeded to gain a competitive edge.

Farrah was not named in the allegations, but Rupp was. Both he and Salazar have vehemently denied the accusations, and Salazar has indicated he’ll make a more detailed response. Other Oregon Project athletes, notably Canadian Cam Levins and American Shannon Rowbury, have defended the coach.

ProPublica, meanwhile, says that a group of seven former athletes and staff who voiced doping concerns about the Oregon Project has now grown to 17, many of whom, it says, have requested anonymity for fear of Nike and Salazar’s reach.

What’s to be learned from all this, and how does the Armstrong case fit in?

One thing that stands out is the nature of the news break. This case came to the headlines through whistleblowers, not through drug testing. Likewise, Armstrong was not caught through a failed test – he often boasted of passing drug tests, though he exaggerated the number. It was testimony from other riders, themselves facing punishment, that snared him.

One of the accusations against Salazar – again, he denies them all – is that he experimented with micro-dosing, the practice of giving an athlete a low dose of a banned substance, enough to boost performance but not enough to get caught. It’s a technique that former Armstrong teammate Tyler Hamilton has discussed at length as being among the postal team’s bag of tricks.

Daly, the BBC reporter and an amateur triathlete, showed how easy it was do in a segment on Panorama, buying the blood booster EPO off the internet, injecting himself and watching his performance rise while his blood tests remained within a normal range.

The point is that the system can be beaten pretty easily. There’s no magic bullet test. Catching cheaters will depend on getting the truth from people who want to tell it and feel they can risk potential reprisals because they will be protected by responsible authorities.

The Role of Journalism

This leads to a discussion of journalism, the purpose of which is to seek the truth. As the Salazar case moves forward, it’ll be vital for reporters to bring their skepticism to the story and hold it close.

The arc of the Armstrong case again is instructive. In the navel-gazing that followed his fall, I heard reporters wonder aloud how they could have been so easily led astray.

The simple answer is twofold. One is celebrity star power. To his credit, Daly shows a clip of himself in the Panorama documentary going fanboy on Armstrong during a brief visit by the cyclist made to Scotland in 2009. No tough questions get asked in that setting. It seems unlikely, given how riddled with scandal track and field has been over the years, that Salazar will get similar treatment now but he certainly shouldn’t – nobody should.

More concerning is intimidation. Armstrong sued his enemies and belittled them in the press. He responded to threats by going on the attack, devastating people’s lives in the process. For years, that strategy worked. Armstrong largely kept the media at bay.

Now, according to ProPublica, Salazar has promised “a detailed response that will prove sources in the story were ‘knowingly making false statements.'” If such a response eventually comes down, the media will need to make doubly sure to fact-check Salazar’s statements – as opposed to presenting them in he-said-he-said format – and to push him to explain how 17 people have somehow all decided to lie about his program.

John Affleck is Knight Chair in Sports Journalism and Society at Pennsylvania State University. This article was originally published on The Conversation. Read the original article.