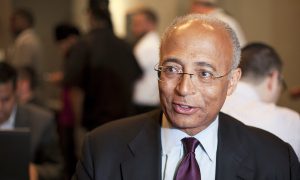 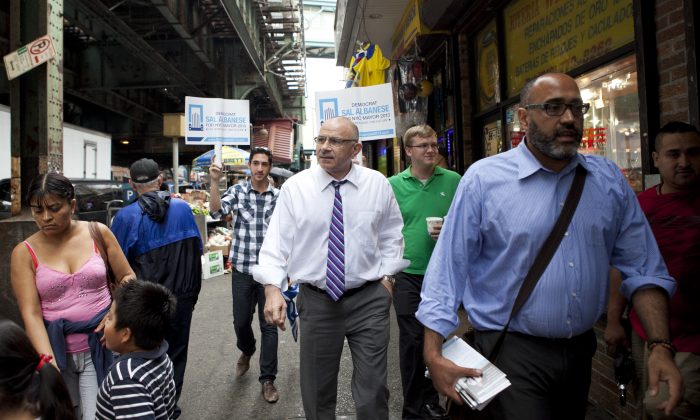 Democratic mayoral candidate Sal Albanese (center) is flanked by members of his campaign while walking down Roosevelt Avenue on August 1, 2013 in Queens, New York. Few people recognize the political independent, who is considered a longshot at this point in the mayor's race, leading up to the September 10 primary. (Samira Bouaou/Epoch Times)
New York

NEW YORK—Democratic mayoral candidate Sal Albanese completed his five-mile Roosevelt Avenue walk and talk tour on August 1 without a gaggle of cameras chasing after him. In fact, it was quite peaceful—just a mayoral hopeful speaking candidly to local residents, with only this reporter and a photographer in tow.

“Hi, I’m Sal Albanese and I’m running for mayor,” Albanese, 63, said to the over dozen business owners he visited. Few had heard his name, even fewer recognized his face, but all were eager to answer his questions: “Are there any problems in your neighborhood? What could I do as mayor to help out?”

Polling at just two percent, and with only a little over $41,000 in his campaign coffers, Albanese is considered a long shot for winning a heavily contested Democratic field. Despite his odds, Albanese continues to hit the campaign trail, reaching out to residents who rarely see mayoral candidates in person.

Albanese preaches his message of political independence wherever he goes, reminding voters he has taken the moral high road, in an era of high-dollar campaigning by refusing to take contributions from lobbyists or those doing business with the city. The move has crippled his capacity to raise money, but he refuses to give in.

“I don’t want to change my core values and begin to start hanging out at the Regency with lobbyists. I don’t think that is right,” Albanese said in an August 1 interview. “I am trying to do things the hard way because it is the right way, otherwise, you cannot get the job done.”

Albanese, a popular Council Member from 1983 to 1997, has never been one to play by the rules of the political system. He ran as a liberal Democrat in a conservative Republican district, upsetting a 21-year incumbent to get there.

He has made politically unpopular decisions based on merit, including refusing to vote on the budget twice due to proposed cuts in vital city services.

Although out of the political limelight for over a decade, Albanese is using much of the same tactics he used during his 1997 run for mayor where he shocked many by garnering 21 percent of the vote in a primary against well-known Manhattan Borough President Ruth Messinger. Unaided by substantial union endorsements or big time cash donations, Albanese hit the streets with his message, much of which is the same today.

“If you really want change in this city, if you want a mayor who will make decisions on the merits, I am your person,” Albanese said.

Keeping Them on Their Toes

Albanese is a regular on the mayoral forum circuit. The forums, which reached epidemic proportions this year with seemingly every group and cause hosting at least one, have offered Albanese an opportunity to interact face to face with a variety of voters and the press.

Despite being an underdog candidate, Albanese refuses to back down at the forums, often calling out his opponents and providing an interesting storyline to what can be monotonous events.

“We have challenged candidates when they act hypocritical, and many of them do. They don’t like to be challenged,” Albanese said. “I don’t play by their rules. They are part of the political class, I am not.”

The Albanese campaign can be counted on to be among the first to fire off emailed statements when one of his fellow candidates makes news. Albanese called out Bill de Blasio when he was arrested at a LICH protest, saying Albanese had been fighting for LICH since January without de Blasio by his side.

The Albanese camp also chided Bill Thompson and John Liu for their comments on the NYPD after the George Zimmerman trial.

“I am there, holding them accountable,” Albanese said.

With just under five weeks to go until the September 10 primary, and matching funds awarded, the front running candidates will be making their advertising push, launching expensive television and print ads.

Albanese said he would not be able to compete on air, but hopes to get his message out with a grassroots effort.

With four candidates battling for the top two spots at a likely run-off, Albanese has a tough road to climb for the spot at Gracie Mansion.

“I believe wholeheartedly we are connecting with people. The issues I believe in, they resonate with people,” Albanese said. “That is what keeps me going.”

Crime
-Add 3800 more police
-Legalize, tax and regulate marijuana, which he says will curb stop and frisk
-Against Inspector General Bill; believes it will create another layer of bureaucracy.
-Reform stop and frisk by improving academy training