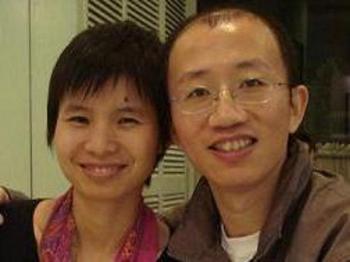 Civil rights Activist Hu Jia and his wife, who is presently under strict house arrest. (The Epoch Times)
Europe

Pirjo Svensson
View profile
Follow
biggersmaller
Print
When the European Parliament (EP) presented the 2008 Sakharov Award for freedom of thought on December 17, the recipient, China’s Hu Jia was in jail in Beijing and his wife, whose passport was confiscated, was prevented from receiving the reward on his behalf.

Hu Jia is renowned worldwide for using the internet to expose the Chinese communist regime’s repression of human rights defenders. Initially, he worked in the field campaigning for victims of HIV/AIDS, environmental abuses, and human rights, but authorities restrained his movements in 2004, which forced him to participate from his home, by writing and publishing reports, according to his wife, Zeng Jinyan.

“We speak out on Human Rights as a friend of the Chinese people,” said EP President Hans-Gert Pottering at the award ceremony.

According to Reporters Without Borders, the Chinese ambassador to Brussels threatened Hans-Gert Pottering in a letter that an award to Hu Jia would “bring serious damage to China-EU relations.”

But Hans-Gert Pottering did not submit to the threats.

“Human Rights must never be seen as a threat to any nation, but rather as individual, collective, and universal rights for every people, indeed for all peoples,” he said at the award ceremony.

Participants at the event were shown a videotaped message from Hu Jia’s wife Zeng Jinyan who thanked the EP and all others for their support, which, she said, is crucial for their struggle. Hu Jia and his wife, as well as other human rights activists and their family members have paid a high price for advocating basic human rights. Chinese authorities constantly harassed family members by, for example, forcing their employers to sack them and forbidding their children to attend school. In the worst cases, they were even convicted without a legal trial.

Zeng Jinyan said that she and Hu Jia have, on several occasions, discussed starting a network to provide moral support for the family members of all human rights activists, so that they can withstand the mental pressure of being threatened by authorities and to “discourage revenge-taking” on their families.

“Our daughter is only one year old and it is an important period in her life, but Hu Jia cannot be by her side. It is very difficult for me to talk about this,” Zeng said, trying to hold back tears.

Zeng suggested that it would be the wish of Hu Jia to use the prize money to initiate such a foundation to support the families of all human rights activists.

Both Zeng and her husband have been warned by the police not to discuss the Sakharov prize. All Hu Jia’s letters that contain information about society or the conditions in the prison were confiscated.

Hu’s most important contribution is his unwavering effort to tell the truth, said Zeng. Her husband never stops writing about the issues that China’s media are not allowed to cover and posts them on the internet for the public to “know and understand.” Tragically, it is not easy even for Chinese to understand their society.

Zeng is also worried about her husband’s health, as he is suffering from cirrhosis of the liver. She said that prison authorities have taken two blood tests from Hu Jia, but refused to reveal the results.

Elena Bonner, Andrei Sakharov’s widow and herself a renowned human rights and democracy campaigner, was a guest at the ceremony. She asked the participants of the event if they had done enough to protect Hu Jia, his wife, and their child from the Chinese regime that promises lucrative business opportunities.