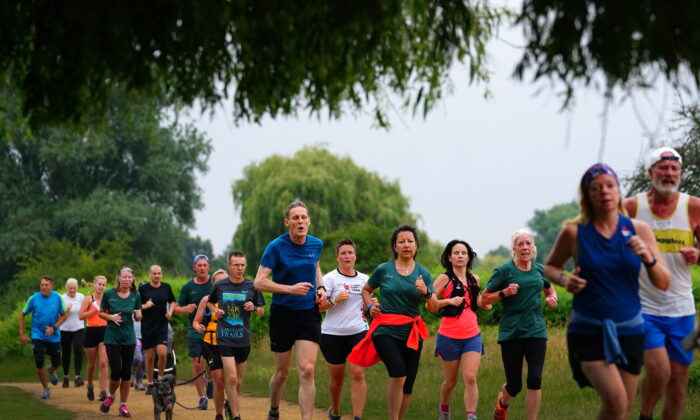 All parkrun events have been cancelled in Wales as a result of the government's COVID-19 restrictions. (Victoria Jones/PA)
UK

The UK’s Health Secretary Sajid Javid said on Tuesday that one of the CCP virus restrictions in Wales is neither “justified” nor “proportionate” after Parkrun events were cancelled.

As a result, Parkrun Limited, the company organising parkrun events worldwide, has decided to cancel its five-kilometer Parkrun events in Wales while the same events can go on in England, Scotland, and Northern Ireland.

Sharing Parkrun’s statement on the decision on Twitter, Javid said he couldn’t see the reason behind the restriction.

“Parkrun has helped so many people improve their health across the UK. I can’t see how restricting outdoor exercise in this way is justified or proportionate,” the health secretary said.

The Welsh government didn’t respond to The Epoch Times’ request for comment.

The number of reported daily COVID-19 cases in the UK has broken a new record on Tuesday, but the numbers of hospitalisations and deaths have remained low.

Governments in Wales, Scotland, and Northern Ireland have all reintroduced stringent CCP (Chinese Communist Party) virus legal restrictions immediately after Christmas, while the UK government, which is responsible for public health policies in England, said it would hold off until at least after New Year because current evidence does not support more restrictions.

NHS COVID Passes are also required across the UK, but with different requirements and in different settings.

Northern Ireland is the only nation accepting natural immunity for its COVID passes, while the other nations only accept full vaccination and negative tests.

People across the UK have been advised to work from home if they can. The Welsh government made unnecessarily going into the office a criminal offense.

Wales resurrected the “rule of six” for meeting in public spaces while allowing up to 10 people to meet if they are from the same household. Up to three households can meet in public places in Scotland.

Hospitality services are restricted to table service only in Scotland, Wales, and Northern Ireland.

Scotland restricted the number of outdoor event attendees to 500, while only 50 are allowed in Wales.

England has shorted its required self-isolation period for people who test positive for the CCP virus, while the rest of the UK still requires a full 10-day isolation period.