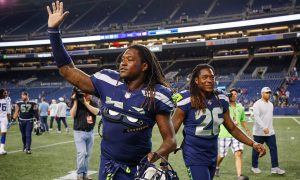 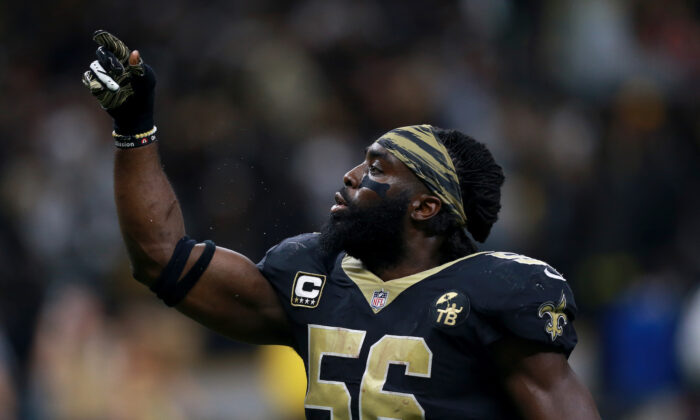 Demario Davis of the New Orleans Saints reacts after recovering a fumble during a game against the Pittsburgh Steelers in New Orleans, Louisiana, on Dec. 23, 2018. (Sean Gardner/Getty Images)
NFL

New Orleans Saints linebacker Demario Davis said he has won an appeal against a fine stemming from the “Man of God” headband he wore in violation of NFL rules and will not have to pay the $7,017 penalty.

Davis, who wore the headband during a match against the Seattle Seahawks, said in an Instagram post that, “My agent just told me that I won my appeal and won’t have to pay the headband fine.”

Instead, Davis said he plans to donate what he would have paid to St. Dominic’s Hospital’s emergency department, located in Jackson, Mississippi.

“Always glory above so I’m taking every penny of that original $7,017 fine and donating it to @stdomhospital anyways,” he said.

Davis has raised more than $30,000 for the hospital selling his Man of God headbands.

WOWWW look at this!! So my agent just told me that I won my appeal and won’t have to pay the headband fine!! Then I see that St. Louis King France came together today to support the movement! Won’t he do it! Look at all these beautiful children of God! Always glory above so I’m taking every penny of that original $7,017 fine and donating it to @stdomhospital anyways. So far, we’ve raised over $30,000 for them from the headbands!! That means yall helped me turn a $7,000 negative into an almost $40,000 positive benefiting people who truly need it!!! Do y’all see how that worked?? Let’s gooooo. That’s crazy! Ya’ll are a part of this journey too!! I can’t thank ya’ll enough either. We on a mission over here obstacles are meant to be conquered!! I’m truly blessed as anybody. We’re restocked on the site with more #ManOfGod and #WomanOfGod color options and have added #ChildOfGod. If you haven’t purchased yours yet or didn’t get the color you wanted, donations will continue to go to @stdomhospital so now is the time to stock up! Thank you, thank you, thank you!! #ManOfGod #WomanOfGod #ChildOfGod #WhoDat #TheSaintsAreTheBestTeam Get your headband at: bit.ly/56manofgod (link in bio)

Davis earlier spoke out about being hit with the $7,000 fine, saying he was unaware of the NFL policy that prohibits players from displaying personal messages on uniforms.

“I don’t think a lot of people were aware of the policy that was in place—I wasn’t even fully aware of it,” Davis told NOLA.com. “I just wanted to put it out and just kind of help fans who care about the game understand a more intricate part of the game.”

Article 8 of the section on equipment, uniforms, and player appearance of the NFL rulebook (pdf) states: “Players are prohibited from wearing, displaying, or otherwise conveying personal messages either in writing or illustration, unless such message has been approved in advance by the League office.”

Davis sported the headband under his helmet during a Sept. 22 match between the Saints and the Seattle Seahawks.

Several days later Davis shared a photo of the headband on Instagram with the caption: “So, I got fined $7K for my headband. Should I continue to wear it, or nah? #LetThePeopleDecide #ManOfThePeople #ManOfGod.”

So, I got fined $7K for my headband. Should I continue to wear it, or nah? #LetThePeopleDecide #ManOfThePeople #ManOfGod ((You can get a #ManOfGod or #WomanOfGod headband too. Hit the link in my bio to get yours and benefit St. Dominic’s Hospital))

Many people responded to his post, encouraging him to continue to wear the headband.

Davis told NOLA.com he expected the incident would eventually reveal its bright side.

“Of course you don’t want to be fined. Nobody wants to lose money but I think any time that the conversation about God is brought up, especially in these times, I think it’s always a positive or silver lining.”

After learning he would not have to pay the fine, Davis thanked his supporters on Instagram, saying that they “helped me turn a $7,000 negative into an almost $40,000 positive benefiting people who truly need it!!!”

“Obstacles are meant to be conquered,” he added.