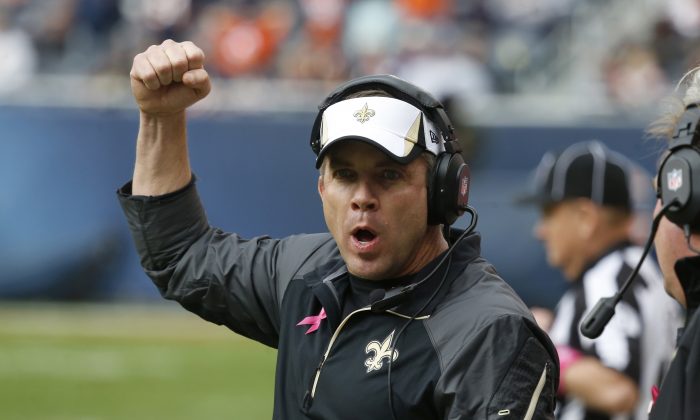 Saints Can Finally Put ‘Bountygate’ in the Rearview

CHICAGO—The Saints have finally moved on.

Spooked as the New Orleans Saints were—top to bottom—at this time a year ago, “Bountygate” seems like little more than a bad dream now.

After a businesslike 26-18 victory over Chicago on Sunday, New Orleans is at 5-0, instead of last season’s 1-4 start, and still among the fast-thinning ranks of unbeatens in the NFL. Drew Brees is off to another scintillating start, Sean Payton is back in charge, and if reuniting one of the best quarterback-coach duos in the league wasn’t intimidating enough, well, the Saints are suddenly boasting a top-five defense to boot.

Most of the credit for that last development belongs to Rob Ryan, the son of bona fide defensive genius Buddy Ryan, and the less-well-groomed twin brother of Jets coach Rex. Rob Ryan was calling the shots for Dallas’ defense last season, and the emergence of Cameron Jordan and Junior Gallette along the Saints’ defensive front, along with rookie Kenny Vaccaro in the secondary, made his move to New Orleans look downright prescient.

But there’s no doubt up and down the roster who has made the biggest difference in the Saints’ fortunes this time around—even if Payton’s players find it hard to say exactly why.

“Coach understands the temperature of this team, when to turn it up and when to dial it down,” veteran corner Jabari Greer said.

“Last year,” Brees said, “everything that could have gone wrong went wrong. … It hasn’t been perfect, but …”

“I can’t quite put my finger on it, either. But if I had to guess, I’d say Coach Payton’s attention to detail is,” and here tackle Charles Brown paused to find the right word, “contagious.”

The Saints got lucky when Chicago’s Matt Forte fumbled a pitch on the first play of the game, but made their own break on the first play of the next series, when corner Malcolm Jenkins scooted around the right end untouched on the blitz and jarred the ball loose from quarterback Jay Cutler. New Orleans settled for field goals after both turnovers; even so, the Bears wound up chasing the Saints the rest of the way.

“I thought our guys played real smart and did what we needed to do to get a good road victory,” Payton said. “It wasn’t always perfect or clean in the second half, but it was good enough.”

Payton conceded that watching Saints games from his couch at home last year was tough. He was parked there because NFL Commissioner Roger Goodell suspended Payton for a year in response to a murky bounty system being run by former New Orleans defensive coordinator Gregg Williams.

Additionally, Goodell fined the team $500,000 and banned general manager Mickey Loomis and assistant coach Joe Vitt for varying lengths of time. Coming off three straight playoff seasons — including a Super Bowl win — the Saints stumbled to 7-9. Payton’s personal life was only slightly less tumultuous. He got divorced, and barred from most NFL contact, his strongest connection to the game was coaching the offense for his son’s team back in Dallas.

Payton talks sparingly about that time. But Brees volunteered last week that one area where Payton has improved noticeably is how thoroughly he gets his ideas across— “He wants to make sure everything is communicated,” is how the quarterback put it — and the coach was inclined to agree.

“There’s a lot of players in this locker room that weren’t here a year ago. There’s constant change,” Payton said. “The thing I noticed most being away one year, you miss out on a draft and free agency class and … that first team meeting there’s 40 new faces.

“Often times as a coach you think they’ve heard your message, or they’ve heard it before when a lot of them, by and large, haven’t,” he added. “This group’s worked hard. They’ve been very eager to please.”

And he’s responded in kind.

Payton admits he was furious at the start of the suspension, resentful a few weeks in, but learned to direct some of his anger and most of his energy into working out. Ultimately, he was humbled when Saints owner Tom Benson gave him a new contract instead of firing him. Payton, in turn, rededicated himself to shoring up the foundation he’s been building in New Orleans since taking a flyer on Brees in 2006.

“He’s pretty consistent,” Greer said. “Maybe a little more mellow in certain instances than he used to be, but he’s the same steady guy.

“You get used to taking orders from a guy like that,” he added. “So even if he goes away and comes back, like coach Payton did, it’s funny how familiar it seems and how fast you can settle back in.”