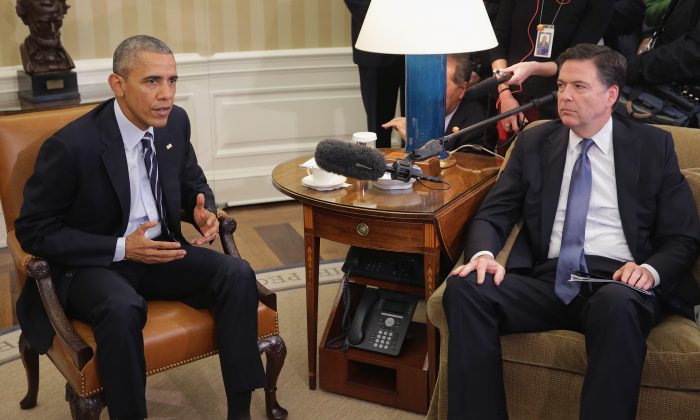 Kristian Saucier, the Navy sailor sent to prison for taking photos aboard a nuclear submarine, will file a lawsuit against former President Barack Obama, former FBI Director James Comey, the Justice Department, and others. Saucier’s lawyer told Fox News on June 4 that he will argue that the law was applied unequally to Saucier, since former State Secretary Hillary Clinton was let off the hook for much more serious transgressions.

Saucier was pardoned by President Donald Trump in March. “I honestly believe that the systems that went after me were put in place to protect people like me, until I was run through the wringer,” Saucier told Fox News on March 10, one day after he was pardoned.

A federal judge sentenced Saucier to one year in prison and ordered him to pay a $100 fine after he pleaded guilty in May 2016 to one charge of unauthorized possession and retention of national defense information.

On 2009, as a 22-year-old machinist serving aboard the USS Alexandria, Saucier took pictures of its propulsion system as “a misguided attempt to have some mementos,” he said. After he destroyed his laptop and a camera, federal prosecutors argued he obstructed justice, too.

His case resembled Clinton’s, who not only kept classified information on a poorly secured private email server, but also had her close aide Huma Abedin forward her emails (including classified information) to Abedin’s husband, disgraced former Congressman Anthony Weiner. Despite getting a subpoena for the emails, Clinton deleted 30,000 of them, exerting additional effort to make the deletion irreversible. She claimed those were her personal emails, but classified information was found among the thousands of emails on Weiner’s laptop. It turned out work-related emails were among those deleted.

Clinton was ultimately exonerated by then-FBI director James Comey in a statement he drafted before interviewing Clinton and other key witnesses. The original draft of Comey’s exoneration was edited to change references to Clinton being “grossly negligent,” a legal term with criminal ramifications, to “extremely careless.”

“We’ll highlight the differences in the way Hillary Clinton was prosecuted and how my client was prosecuted,” Saucier’s lawyer Ronald Daigle told Fox on June 4. “We’re seeking to cast a light on this to show that there’s a two-tier justice system, and we want it to be corrected.”

Aside from the double standard, Saucier argues he was singled out by the Obama administration.

“It was a clear attempt by the Department of Justice under Obama to use me as a scapegoat to take the heat off Hillary Clinton for mishandling classified information,” he said. “This case could have been handled at a much lower level, within the military, as it should have been because I was active duty at the time and I would have taken my punishment the same way—like a man.”

Daigle expects to soon file the suit in Manhattan.

Saucier’s case seems to draw on the Equal Protection Clause in the Constitution’s 14th Amendment. It only applies to state and local laws, but the Supreme Court in a 1954 ruling reinterpreted (some say rewrote) the 5th Amendment’s Due Process Clause to also include equal protection. The ruling expanded desegregation of schools to the District of Columbia, where federal law applies.

Trump pardoned Saucier on March 9, deferring to his military service.

“He has been recognized by his fellow service members for his dedication, skill, and patriotic spirit,” White House press secretary Sarah Sanders said, pointing out that Saucier had mentored younger sailors and served as an instructor for new recruits.

“The sentencing judge found that Mr. Saucier’s offense stands in contrast to his commendable military service,” Sanders said. “The president is appreciative of Mr. Saucier’s service to the country.”

Like Saucier’s lawyers, Trump compared the handling of the Clinton case to that of the sailor’s, in a Jan. 2 tweet.

The Justice Department is currently investigating why then-Deputy FBI Director Andrew McCabe sat on his hands for one month, shortly before the 2016 election, after finding out that additional Clinton emails were discovered on the Weiner laptop.

Saucier, who lives in Vermont, said the felony conviction ruined his life. He had trouble finding work after his release, finally getting a break at a waste management company. He foreclosed on his house, and his cars were repossessed.

He said the pardon doesn’t come with a “magic wand that gets waved and makes everything right,” he told Fox News, but it has helped him to start rebuilding his life with his wife and young daughter.

He has now found a job in design and engineering for an industrial boiler company, putting his skills to use again.

“Things are starting to go in the right direction,” he said.

He said he was grateful to Trump for taking a stand on his behalf, thanking the president “for having the moral fortitude to follow through with your promises.”

“Mr. D’Souza was, in the President’s opinion, a victim of selective prosecution for violations of campaign finance laws,” the White House stated in a May 31 release.

“In light of these facts, the President has determined that Mr. D’Souza is fully worthy of this pardon.”

D’Souza’s campaign contributions were scrutinized by the FBI after he released a documentary in 2012 that dug into the past and motivations of then-President Obama.

“The Obama administration singled out Dinesh for things most people don’t even get charged for,” Saucier said. “President Trump noticed that my career was exemplary and that I didn’t deserve what happened to me.”