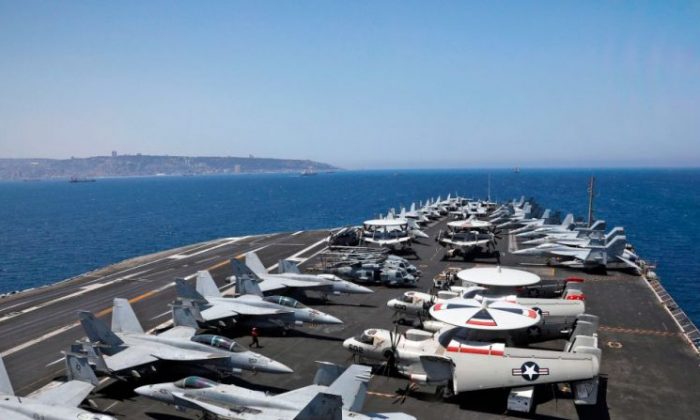 A death occurred due to an accident on the USS George H.W. Bush on Sept. 17, 2018. This general view of the dock of the carrier. On July 2017. (Ronen Zvulun/AFP/Getty Images)
US News

An investigation has been launched after a U.S. Navy sailor was killed in a “mishap” on Sept. 18.

The accident happened on the flight deck on the aircraft carrier the USS George H.W. Bush.

Cmdr. Dave Hecht, a Navy spokesman, told the Associated Press that the death wasn’t related to the weather. The carrier was out at sea when the death occurred.

No other sailors were hurt.

“Out of respect for the Sailor’s family and per Department of Defense policy, the name of the individual and additional details on the mishap will not be released until 24 hours after the family has been notified,” the U.S. Naval Air Force Atlantic said in a statement obtained by CBS.

Hecht told The Virginian Pilot that pilots had been conducting carrier qualifications at around 4:45 p.m. on Sept. 17, the time of the death, noting it was a “tragic situation.”

“Our hearts and prayers go out to the family,” Hecht said.

A US sailor has been killed in an accident aboard aircraft carrier USS George H.W. Bush.https://t.co/hHdalAVaqo pic.twitter.com/fDOumeitzO

According to the Navy’s website, the USS George H.W. Bush is a warship “designed to provide adaptable and decisive combat power to our national leadership.”

It added, “We have many critical non-combat capabilities and responsibilities–they are all important. We will enthusiastically embrace and excel at any assigned mission but our ultimate benchmarks will always be combat readiness and combat effectiveness.

According to Stars and Stripes, the ship is one of 25 Navy ships sent to sea last week ahead of Florence.

The Navy has two ships that were prepared to help assist hurricane relief efforts but the Bush isn’t one of them.

Spokesman Col. Robert Manning said on Sept. 10, that U.S. Fleet Forces Command ordered all Navy ships in Hampton Roads, Virginia, out to sea, ahead of Hurricane Florence, which brought intense storm surges to the coast.

Florence has since deluged the Carolinas and is headed north as of Sept. 18, with at least 32 people killed.