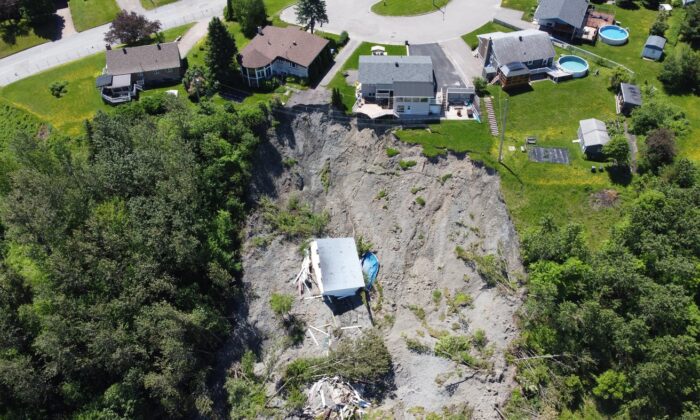 A building lies at the bottom of a landslide that destroyed a house and forced 77 residences to be evacuated, in Saguenay, Que., June 20, 2022. (The Canadian Press/HO)
Canada

Officials in the City of Saguenay, Que., have renewed a state of emergency for a neighbourhood under threat of another landslide.

On Wednesday, Quebec Premier François Legault toured the area and met with residents, announcing the government would increase the emergency aid destined for affected people.

He said most of the roughly 200 people who were forced from their homes after a landslide destroyed a home on June 13 would be able to return in two to four months, once the ground is stabilized.

However, he said five homes would be demolished and four others may also need to come down.

An engineer with the Transport Department said Wednesday a record 157 millimetres of rain fell over a one-month period and was behind the initial landslide in the La Baie district of Saguenay, about 220 kilometres north of Quebec City.

The province has said it will pay up to $375,000 for people whose homes are demolished and will provide a daily living expense allowance of $40 for each evacuee.