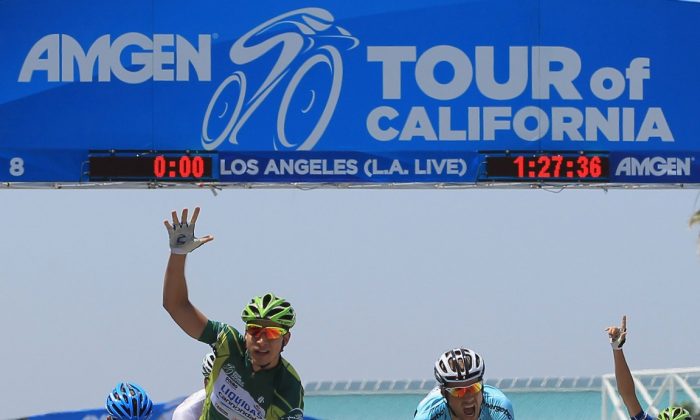 Sagan Wins Five of Eight Stages of Tour of California

Peter Sagan, the 22-year-old Slovakian cycling champion, came to America and beat the nation’s best in their own backyard. Of course, he also beat the best from the rest of the world.

Sagan, riding for the Liquigas-Canondale team, won the first four stages of the Tour of California, finished second in Stage Six, and won Stage Eight. Sagan didn’t even make the top ten in the General Classification, but his is a feat people will remember.

When asked by NBC Sports if things could possibly have gone better the 22-year-old Liquigas rider replied, “I don’t know—maybe if I won another victory on Big Bear, but in life we can’t have everything. I am very glad and happy, and thanks to my team.”

“Tom Boonen had a good train. The last kilometer was really fast—the last turn right was also dangerous. It was good we had been there six times already.” (The route included several laps around the city of Los Angeles.) “I went at 150 meters and I finished first so I am happy.”

Rabobank’s Robert Gesink will also be remembered. This 25-year-old Dutch rider won the overall by the biggest margin in the seven-year history of the event—a whopping 46 seconds. Gesink finished fourth in the Stage Five time trial and won the Queen stage—the hardest stage of the race—the climb up Mount Baldy by enough to win the race overall.

The race ran from Beverly Hills to Los Angeles and ran several laps around Hollywood before the finish on Hollywood Boulevard. There were constant attacks, but none mattered; Liquigas and Omega Pharma-Quickstep were each determined to set up a sprint finish.

Omega set up a perfect leadout train for Tom Boonen, but it didn’t matter. Sagan came onto the final straight fourth wheel behind his teammate Dania loss; Sagan cut right around Boonen when the Omega rider started sprinting, and Sagan simply blasted by to win the stage by half a wheel.