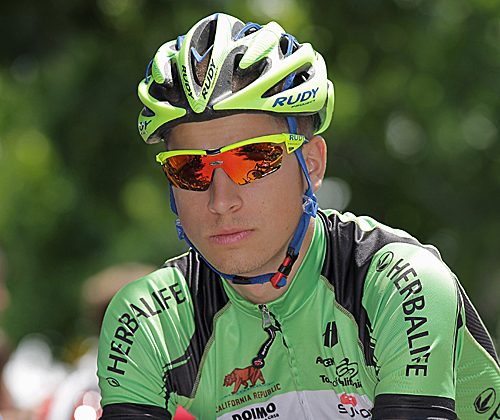 Peter Sagan, riding for Liquigas-Cannondale, prepares for the start of Stage Seven of the 2011 Amgen Tour of California. The young Slovakian rider took second in the 2012 Gent-Wevelgem Classic Sunday March 25 and won Stage One of 2012 Three Days of Panne on Tuesday, March 27. (Doug Pensinger/Getty Images)
Cycling

Sagan, who had ridden quietly in the peloton all day, made a strong move in the final kilometer to take third wheel behind teammate Fabio Sabatini and Astana’s Jacopo Guarnieri. In the final hundred meters Sagan broke to the right and blasted past Sabatini to catch Guarnieri at the line, thrusting his bike forward to win the race by six inches.

Guarnieri, beaten mainly by Sagan’s better stretch, pounded his handlebars in frustration. Sagan’s perfect timing had given the Astana rider no room to react with a burst of his own.

Driedaagse De Panne, usually ridden as a warm-up to the Tour of Flanders this Sunday, is a three-day, four-stage contest opening with hills, followed by a pair of flatter stages and a final time trial on the same day as Stage Three.

Considered a second-tier race, the Panne attracted a lot of Belgian teams, and some of the ProTour teams didn’t send their strongest squads. Astana and Liquigas made it very clear by their rosters that they were serious about winning the race and testing their Flanders lineups.

Stage One was filled with hills—twelve categorized climbs, most only a kilometer long and four-six percent in grade, but all with very step sections, up to 17 percent for some climbs.

Clarke was the first to drop off; the rest persevered over the climbs and cobbles while various chase groups formed and dissolved behind them. Finally around 46 km to go this break was caught and another group of riders escaped, led by Sebastian Langeveld of GreenEdge: Assan Bazayev, Simone Ponzi, and Dmitriy Muravyev (Astana,) Daniel Oss and Fabio Sabatini (Liquigas,) Sylvain Chavanel (Omega-Pharma-Quickstep,) Leif Hoste (Accent Jobs-Willems Verandas,) and Marcel Sieberg (Lotto).

When this group was about to be caught by the peloton, led by Vacansoleil’s Liuwe Westra, with 38 km to go, Oss took off on his own. Westra, Langeveld, Jacopo Guarnieri (Astana,) and Ben Hermans (RadioShack-Nissan,) caught Oss after six km of chasing.

With so many strong teams represented in the break, no one in the peloton seemed willing or able to organize a chase. Finally, after the gap grew to 24 seconds, Sylvain Chavanel, Nicki Terpstra, and Dries Devenyns of Omega Pharma-Quickstep cranked up some speed, splitting the peloton but cutting into the lead.

The peloton reeled in the breakaway over the next 14 km, finally catching them just before the final climb of the day, the Kortekeer, a kilometer long at 6.5 percent but with ramps up to a leg-breaking 17 percent. Here Astana’s Dmitriy Muravyev attacked, pursued by small group: Peter Sagan, Simone Ponzi, Nicki Terpstra, Leif Hoste, Liuwe Westra and Stijn Devolder (Vacansoleil,) and Pieter Jacobs (Topsport Vlaanderen-Mercator.)

GreenEdge drove the peloton hard to catch these escapees, and in the last few kilometers brought everything back together. About 40 riders had managed to keep up with the leaders, to contest the final sprint. None of the pure sprinters had made it over the hills.

Into the final 500 meters Peter Sagan was 50 meters behind the leaders. He pushed forward to catch his teammate Sabatini and then bided his time to make his final surge and stretch to snatch the win from Guarnieri.

Stage Two, 216 km from Zottegem to Koksijde, has five categorized climbs right in the middle of the stage, but none are severe. Expect another sprint finish—the race is too short and the stage too easy for a breakaway to survive. Likely the real sprinters will survive the climbs, so André Greipel and Francesco Chicchi will probably feature in this finish, along with Romain Feillu, Stuart O’Grady and Peter Sagan.