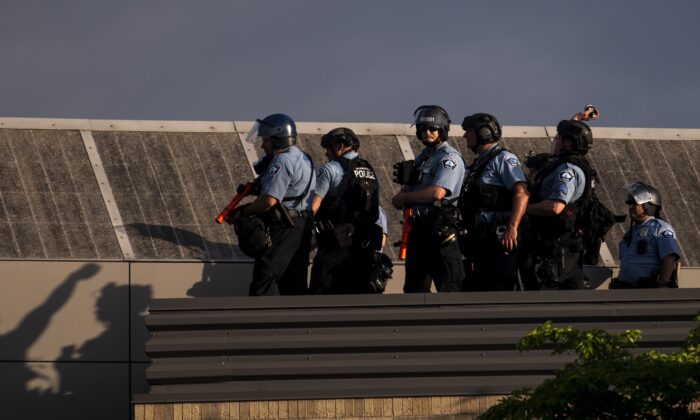 Police officers stand on the roof of the Third Police Precinct as one launches an explosive projectile down on the protesters below in Minneapolis on May 27, 2020. (Stephen Maturen/Getty Images)
US News

“Minneapolis needs to be safe for its residents—that’s one thing we can all agree on,” Mayor Jacob Frey said in a statement. “I convened this group of community leaders to think critically about the current and future safety needs of our city and to provide transformational recommendations for a path forward. They did just that. From significantly improving the quality of our police trainings to expanding our nationally recognized violence prevention programming, we have the opportunity now to achieve true progress and create lasting change.”

The report recommends the city start a communications and marketing plan to recruiting new officers, costing about $200,000.

“Minneapolis residents have made it clear that they want to see a culture shift happen within the Minneapolis Police Department, along with an increased focus on transparency and accountability,” workgroup co-chair Nekima Levy Armstrong said in a statement. “Residents also want to see a significant reduction in gun violence and a stronger focus on violence intervention and prevention. Mayor Jacob Frey has the opportunity to implement these recommendations to improve MPD and make our city more livable for all.”

The report follows the Minnesota Supreme Court ordering Minneapolis to hire more police. Two years ago, city residents claimed the city was violating its minimum police requirement of 731 to about 634 after an MPD officer killed George Floyd while in custody, and rioters caused $500 million of damage in and after May 2020. By 2021, the MPD had lost nearly 300 officers.

“And this historical understanding of the provision as an employment requirement—not just a funding requirement—was clearly expressed in the charter before the 2013 revision that went into effect in 2015,” Gildea wrote.